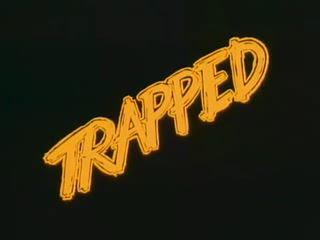 Delivering very little of the bloody stuff and titled so simple that it can either be easily confused with something else or forgotten altogether, it’s no surprise this rare notch of a slasher movie is so obscure.

A pair of wealthy ladies drove home from a Christmas party only to be taken hostage by a trio of escaped convicts from a nearby prison. They drove higher up to the snowy mountains as the convicts plan their next step, but ends up crashing their car into the mines and find themselves trapped inside.

All the while, a no-nonsense cop somehow trailed the missing car and decided to climb down into the  same mines with hopes of capturing the criminals himself. His path crosses with the group and it seems everything was going to be okay until they realize that something else is inside with them. Something awfully hungry.

Plotwise, Trapped can be considered as a forerunner to other crime-gone-wrong slasher movies like Malevolence, Botched, The Cottage or even Trackman, where criminals on the run find themselves holding hostages only to be siding with them in the end where an even more dangerous threat starts to thin down their numbers. The story of Trapped is precisely this, only with cheap sets and hammy acting littered through this forgotten B-flick, which wasn’t all that bad if the payoff was anywhere as enjoyable.

The first half played more like a straight hostage thriller only taking place inside an obviously fake cavernous mine and with a cast of bland one-to-two dimensional characters. Most of this act centered on one criminal taking advantage over the girls in the most nonthreatening manner, while one of his cohorts looks for a way to get out and the other rotting dead from the crash. This isn’t all that bad considering the overacting and weird direction can be entertaining for some but it's hard to make out thanks to the film's awful lighting and took too much time that once the horror bits happen, it felt like the flame already died out. And, to make it even harder to appreciate, it never felt all that intense thanks to its hammy nature.

Sadly, Trapped went further downhill once the slasher finally showed his deformed rear; looking like Madman Marz from Madman (1982) and having the same man-eating origins that of Harry Warden of My Bloody Valentines (1981), the killer here uses a claw-hoist to murder his victims given that they weren’t dead to begin with. Unfortunately, with so little characters alive to pick off, this spree was slim in number and it wasn’t too excited as he spent most of his time literally looking down on them from the upper mines. Adding further insult, this man-monster was get killed off rather easily about five to ten minutes before the ending credits came, giving way to one overly long monologue from an obvious accomplice concerning the killer’s origins.

It all ends with a bittersweet finale that’s sappy all through with one very confusing ending shot that makes very little sense. Honestly, I really wanted to enjoy Trapped since the idea was simple enough that it holds a lot of potential as a claustrophobic slasher but with its high dose of cheddar and little to none horror action, it is just an underwhelming rarity that may deserves its obscurity.

Bodycount:
1 male had his head crushed
1 male crashed through windshield, dies from wounds
1 male pierced through the chest with a claw-hoist, cannibalized
1 female shot on the head
1 male stabbed on the mouth with an improvised spear
1 male and 1 female killed in cave-in
Total: 7
Posted by Kaijinu at 1:50 PM