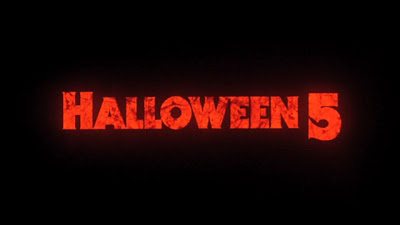 Guess the comeback for Michael Myers in the late 80s was so good that it cashed in a lot of moolah and before you know it, we got this overworked dreck.

Totally ignoring the shock ending Part 4 left us with, Revenge had Michael Myers somehow crawling his way out of the mine shaft he was shot down into, got carried away in a river's current and then stumbles next to a hermit's cottage. Said hermit kept the unconscious Michael under his care for a year and got thanked for his good deed with a broken neck when the killer woke up on Halloween.

As of routine, he's off to finish off Jamie and anyone that got in the way. (the works) All the while, Jamie is kept under Dr. Loomis' care and suspects that Jamie's psychic connection is the key on figuring out Michael, ending the madness once and for all. (Also the works) Insert Jamie's big stepsis Rachel dying, Rachel's bestfriend looking after Jamie, more teens to kill, a Halloween party for kids, sad attempts to humanize Michael and a Mysterious Man in Black that does nothing but stand around and look... mysterious, next thing you know, an overblown pile of wasted sheets of paper known as a script happens, which somehow turned into this movie.

With so much going on in so little time, budget was overworked, continuity was neurotic (why is the Myers house suddenly a giant gothic mansion?), characterization was rushed and very cliched (comedy cops? are you kidding? And what of that mysterious man in black?) and none of the thrills and intrigue the first two movies from this series made it into this entry. The murders are fair, but it has zero suspense and gore's more ho-hum as it has nothing very shocking to offer. Except, of course, the death of Rachel, who even the producer of this entry regretted doing as it lagged the film into a hobble with very little people to root for.

Well, there is still Danielle Harris, but her performance here is nothing different from of Part 4 and even worse was that she's paired up with a random boy who nearly became a child victim himself. They even put in a good cheese measure by having Michael tear-jerking as lil' Jamie sweet talked his uncle, making him take off his mask and be a good Uncle for 20 seconds before freaking into a rampage. So, Michael has no control over his actions? I dunno, it's their rushed story, not mine. Donald Pleasance returns as Dr. Loomis again and not much changed for his character here, though I do believe he's getting nuttier in each movie, at least hinted here when's he's willing to use Jamie to lure Michael into a trap. Guess hunting evil does that to you...

With a little more thought and a little less of the random, this movie would probably had made a lot more sense. But, as of any franchising, there's always gonna be that one sequel that'll stink to high Heaven. Will this spell the downright spiral of this movie series into mediocrity? Well, the next sequel kinda says that, but it was my kind of mediocrity.