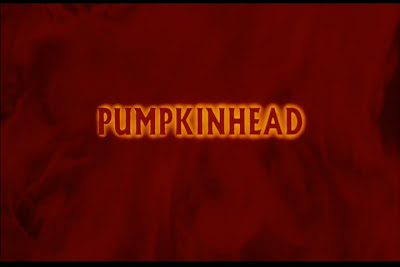 
"Keep away from Pumpkinhead, Unless you're tired of living,
His enemies are mostly dead, He's mean and unforgiving,
Bolted doors and windows barred,
Guard dogs prowling in the yard,
Won't protect you in your bed,
Nothing will, from Pumpkinhead."

In 1957, Young Ed Harley spots a bloodied man being hunted down by an enormous creature. The man stops at his family's doorstep and pleas to be let in, but Father Harley stood his ground and refuses to help the man as whatever's hunting him will harm the family if they intervene. True enough, the monster catches up and murders the poor chap. Thus live the legend of Pumpkinhead...

Moving to the present, Ed Harley is now a grown man with a loving son and a life he's satisfied with. He owns a local store where townies and traveling folks buy their supplies and it was a day like any other when six teenagers from the city stopped for gas and food. Harley has some errands to do for a friend that time so he leaves his young son alone to watch over the store, but when one of the teens accidentally run over the young lad with his motorbike, the rest flee the scene while one stays with the injured boy until his father's return.

Seeing what the teens did to his only son, Harley ventures deep into the woods in search of a witch known to possess powers that can right the wrong. He finds her but she informs Harley she cannot bring his son back from the dead and, instead, can bring vengeance to those responsible with a price. Harley agrees, gets tasked to dig out a disfigured corpse from a pumpkin patch and bring it to the witch so she can finish her ritual. With blood drawn from his and his son's hand, the demon Pumpkinhead rises to finish off the teens one at a time.

But as the demon continues his slaughter, Harley finds out that he can see and feel the agony of the victims; regretting his action, he begs the witch to stop the demon. But when she tells him what's done is done, he has no choice but to stop the demon himself and save what's left of the group.

A cult classic of its own right, Pumpkinhead gains its following due to its special effects, easy-to-follow plotting, good gore and an iconic monster. Though labeled as many as another teen kill due to it's similar tropes to pretty much any backwoods slashers made before, the film's only differential fodder is its killer is a gigantic demon, a throwback to the old monster films with a workably entertaining stab at a tragic vengeance story.

Billy, Ed Harley's son, is a nice kid; he's young, helpful and very loving. Seeing him die from the accident and his father grieving over his dying son is enough to bring out the dread and intensity from a simple yet effective story as the vengeance theme is played against both odds, with neither Harley or the teens can win against it. Only through redemption, the kind that comes with an ultimate price, can save them and that being said, Pumpkinhead's a tragedy for the horror kind, a bit more soul for the gore.

And with this kind of plotting, it'll take quite a performance to pull it off. Thankfully, Lance Henriksen is hail-worthy as his role of a grieving father whose rage is all understandable but redeems himself later on when he finds out his thirsts for revenge made him more of a monster than the demon itself. For the rest of the cast, especially the teens, left little to be commended since they're dispatched all too quickly around the second half, leaving the third to be no more than a long chase scene with the monster on the prowl for panicky teenagers. Then again, more of the focus was on Harley so this didn't bother me much, though it does make me think how different things would have been if the kids were more fleshed out.

The backwoods settings is also a surprising success compared to the majority of other backwoods slashers, capturing the sense of suspense and isolation with effects like fog and lighting bringing out some rich atmosphere, from the scenes involving the witch with bright red lights showing the seriousness of her role, to the thunderstorm-esque wind blowings that sortah acts like the creature's calling card. Gore effects are nice, not too shabby and not too gory. It's mostly tooth-and-nail maulings from the monster's end but there are murders which have it utilizing some tools along the way.

And speaking of which, no horror fan will fail to point out the creature effects showcased for the movie; though its design was inspired by the Xenomorphs of the Alien series, the demon Pumpkinhead is a tribute to folklores and legends made to life by some very well designed animatronics, twice as big as anyone in the film and twice as strong. It's origins was explained very little, including its unexplained connections to Haggis, an old witch that lives in the forest, save she seems to know the responsibility the creature carries when summoned. There are indications she likely still has some concern to the people that seeks her "help" as she warns them of it but, in the end, those people are the ones paying the most, a route that downbeats the film's ending but satisfying all the way.

A good watch for any night when you're craving for dead teens, backwoods horror or a plain B-Monster flick; kinda serious toned, featuring zero skins and moderate blood, but Pumpkinhead is still a deserving title for any slasher/monster completists, or to any horror fan in general.

Bodycount:
1 male mauled and strangled to death
1 boy ran over by motorbike, dies
1 male mauled to death
1 female had her face clawed repeatedly and forced through a window
1 female dropped back-first to a rock
1 male impaled to a rifle
1 male shot to death
Total: 7
Posted by Kaijinu at 11:45 AM