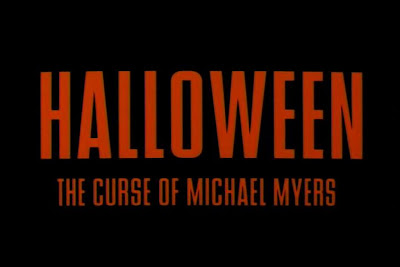 Four stars? For a messed-up wreckage such as this? What can I say? The franchise finally loosens up, Michael adapted to the 90s and we finally get the sense of mayhem that Michael should had been doing since his return.

It's been six years since Michael's escape, courtesy of the mysterious man in black at the end of Part 5; an underground Celtic druidism cult known as the Thorn Cult has somehow obtained Michael in their possession and captured his niece, Jamie Strode (now played by a no-name 16 year old actress), who we now see impregnated and bearing a healthy baby boy. Through a change of heart, a nurse working for the cult decided to free Jamie along with her son one night, unbeknownst to them that Michael is watching and proceeds to kill off the traitorous nurse and gives chase to his niece. After a long cat-and-mouse pursue and a desperate attempt to call for help, Jamie managed to hide away her baby in a bus station and ultimately meet her demise under her uncle's hands and a mean corn thresher.

In Haddonfield, the nightmare that is Michael apparently became a distant memory and the local teens are trying to set-up a Halloween party in tribute to Michael's mysterious but welcomed disappearance. The Myers house is also now occupied by relatives of the Strodes (family who adopted michael's sister from the original), namely single-mother Kara Strode, her six-year-old son Danny, Kara's teenage brother, their jerky dad and their passive mum. Across the street watches a grown-up Tommy Doyle, the boy that Jamie Lee's character on the original babysat, now obsessed on figuring out Michael Myers and what motivated him into murder, suspecting a connection with a Thorn Cult. Elsewhere, Dr. Loomis, apparently grown tired and old of the mishaps, is now retired from Smiths Grove Insanitarum.

After hearing Jamie begging for help on a local radio show, Tommy finds her baby and runs into Dr. Loomis at the Haddonfield Memorial Hospital, telling him that the baby he have with him is the last of the Myers' bloodline. Fearing for the people that lives in the Myers house, Loomis departs momentarily with Tommy to warn the Strodes, but the attempt failed and Michael murders the two occupants no sooner as Loomis left.

Meanwhile, Tommy meet up with Kara and her son, Danny, warning them of the dangers they're in if they stay in their house. He also shares with them the information he has regarding the Thorn cult. It soon becomes clear that Michael isn't the only threat, as the cult finally catches up with Tommy and demands for the baby. But for how long is Michael going to be under their control? And by then, who will be left?

This is how Michael should have came back; full on gore, no holds barred while still put together (somewhat) logically. It's never boring, the fast pace is filled with either building or intense scenes, and unlike the previous two, the character scenes are actually worth something. (No offense Danielle Harris. We still love you, just that screaming and running got old pretty fast)

The Thorn Cult subplot is an oddball addition to the movie, mind you though; it's a bit of a cheat and a stretch of an explanation to one of cinema's most recognized man monster but as far as origins go, this one has a creative sense to their motives: it's a hunch, but I'm guessing with them doing a Celtic ritual early in the movie and then doing surgeries in the latter half, the Thorn Cult are probably merging magic and science to treat some sort of disease, given to the hints such as charting rune lettering with genetics. But given that is the reason to do all this, why let Michael live? I mean all they need is the baby, so why still keep him around? We'll never know.

In full slasher film terms, Halloween 6 is also the entry that didn't shy away on the red stuff. It's almost a game change, but Michael Myers here finally wised up and got creative with his killings. From the classic knife stabs and slits, to an messy axe murder and head impalement, to a full on gore fest of a baked head via fuse box and a machete massacre. Also, kudos to George P. Wilbur, who did a fantastic job on acting as the maniac, capturing the air of threat that was Michael as closely as possible with the characters earlier 80s incarnations.

My only gripe with this flick is that I really wanted to know if some major characters here died; I mean cheats may come and go, but this movie already done enough cheats to have me wishing they could at least spare us some closure. The most infamous of these unclear fates can be seen at the ending, an anomaly that I can sort of live with for how kinda creepy it is, but we never really know who or which died back in that final scene...

There's actually another version of this movie, dubbed the Producer's Cut, which features an entirely different opening and ending, among many others changes. As of writing this, I only heard about it and I kinda like what I'm hearing, but so far, I'm going to stick with this as my underrated fave entry. Even the highly praised H20 has nothing to the gore-filled craze this entry has (don't you judge me! H20's talky nature bore the hell out of me!), so if you're very open to B-movie worthy plot twists, monster bloodshed and seeing Michael Myers bleed green liquid from his eyes, then Halloween 6 is a curse worthy of your attention!

Bodycount:
1 female had her head shoved to a spike
1 male had his head twisted and nearly decapitated
1 female pushed to a corn thresher
1 female hacked with axe
1 male pinned to a fuse box with a knife, electrocuted until head explodes
1 male knifed on the gut
1 male had his throat cut with knife
1 female stabbed to death with knife
1 female found knifed on the gut
5 victims slaughtered with machete
1 male head pushed through bars
Total: 15
Posted by Kaijinu at 2:09 PM