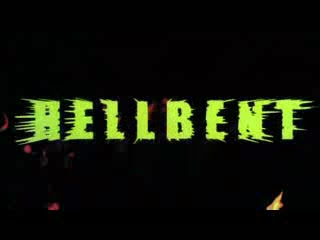 Gay-themed slasher flick? I say, why not?

I'm a straight dude but that ain't no real excuse at all to stop myself from seeing one of the most acclaimed and well-enjoyed slasher flicks out there! Cuz, let's face it, even that's "sexist" and I don't discriminate. That's so...un-slasher-like!

Hellbent is an easy movie to swallow as there ain't much to tell about it's plot: it starts off with a couple of gay lovers doing it in a parked car in the middle of the woods and by the time one of them starts giving heads, the other gets his block chopped off by a sharp sickle, right before the killer viciously attacks his way to get the other half of this men-on-men shagging.

The case is noticed by the local police force, the same station where our lead boy Eddie works as their desk jockey, though his real goal is to become a cop like his late dad. Since it's Halloween, the chief decided to give him a break for the night, even let him adorn his dad's uniform as his costume, so he can meet up with his three equally gay buds: Chaz, a sex-addict, his shy younger bro Joey, and Tobey, a head strong drag queen. Eddie also encounters a young biker getting a tat, who clearly notices our Ed eye-balling him from the distance.

As night fell, the quartre decided to walk through the same woods where the opening murder took place in typical dumb teen judgement, thinking the killer's long gone. But surprise, surprise, who's that topless devil-masked bodybuilder out there watching them? Surely enough, this unnamed masked man of the night follows these boys all the way to the party, apparently interested in collecting their heads for reasons unknown. After a hack-a-thon of headless spree, we're thinned down to just Eddie, his new lover and a home invasion final set-piece.

Regardless of preferences, Hellbent is a true slasher film at heart; it follows everything by the book and openly molded the plot with its homosexual theme thus the reason, I believe, why it garnished an open acceptance with not only its gay target audience but also some straight horror lovers alike.

Production is beautiful despite its low-budget with eye-catching Argento/Bava-esque style lighting, even paced action sequences that's built right for intense and exciting scenes, and actors going the distance to make their characters likable.

There's also some awesome gore effects that'll make any gore hound happy, one of the high points that goes so well with everything else with the movie despite being CG generated/enhanced. While the murders are all the same kind of execution (decapitation by sickle), that didn't stop the movie to create some worthwhile kill scenes that brought out some cool, brutal and inventive sickle action, such as a victim gets hacked repeatedly in a populated strobe-lighted dance floor, before getting his head cut and pulled off. There's another involving a man's near death experience with the killer's sickle, but only to be save by a glass eye in an image strikingly similar to Lucio Fulci's eye gag from Zombie.

The killer in Hellbent is also another pro for the film; around the decade of its release, slasher villains normally start off being mute only to break into a bumbling fools by the time they're unmasked. The killer in Hellbent, however, opted to be a pure, random yet invincible killing machine with no dialouge, no real identity and no real motive other than to slaughter. He wasn't even unmasked at the end, but I wouldn't think it'll matter. Why he targeted these men, or whether he's doing this cuz he's homophobic will never be answered, but one fact was certain, he's good at what he do.

No matter what angle you look, Hellbent certainly got the slasher subgenre by the book. Everything from a Micheal Myers-inspired killer to the well made stalk-and-kill set-pieces, it certainly shouts near-perfection as a bodycount movie made to be enjoyed and, thankfully, does the job right.