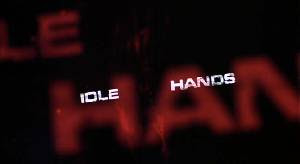 Before he was a doomed psychic boy running from Death itself, Devon Sawa was Anton Tobias, a lazy slacker whose life revolves around his parent's couch, junk food and weed. He basically wastes his life with his stoner friends (Elden Henson and *gasp* Seth Green!) but all that's gonna change when his parents mysteriously disappears (killed actually) and his right hand begins to act with a murderous mind of its own, killing his two bestfriends in the process. Worse even is that he also unwittingly asks his hot neighbor (completely unaware of the murderous hand) out for the Halloween dance and, further complicating all of this, there's also a groovy chick with a magical dagger out to destroy the evil that seems to be possessing hands.

Now guided by his zombified buds who came back to life for reasons that the distance of "the light" is too far (and that it comes with uncool music that sounds like "Enya"), Anton must find a way to stop his possessed hand from killing everybody else, which should have been less of a burden if it remained attached to Anton. Guess cutting it off was a bad idea...

Idle Hands (1999) is a stoner movie done as a horror comedy that defies a singular sub-genre. We got dabs of Satanism, possession, zombies and a delicious slasher movie that proves not all killers must be seven feet tall to be threatening.

It is often disregarded by many critics as a flopfest as the movie really felt like a feature length version of Evil Dead II scenes involving a similarly possessed hand in a torture and killing spree. It tries the slapstick approach around the first bulk of the run as Anton, with the evil hand is still attached, attempts to control it from murdering anybody at arm's length, but it never has the same kind of looniness and gory mayhem Ash had with his own killer limb in the aforementioned Evil Dead sequel. There's also a hint of Beetlejuice in it, where Anton's two bestfriends come back as the pot-smoking dead who seems to have no real problem adjusting to their new undead state and remain nonchalant about Anton's killer hand. And to top the movie's disregard to any sense of realism, we also have a young Jessica Alba playing a character our Anton have been crushing on, falling for the wiggling hand antics of our hero. (And they had sex! What the hell?!)

So do these little imbalances really make Idle Hands (1999) a bad movie? Oh, hell no! Let's try to remind ourselves that we have a possessed hand here killing people, not a historic re-telling of the Nazi Holocaust or Lord Christ's final judgement. We're talking about a horror-comedy here and though Idle Hands may fail as a tribute to some better horror/ horror comedies out there, it's pretty okay as its own mess. It has the teen slasher gig rolling with quite the effect, jokes and gags mostly laugh worthy and even well written when it hits you right, and the gore effects are a real eye candy. It also has one of the wildest party crash ever, with a rather nasty head scalping to boot.

The final set-piece of the movie is where all the crazy factor goes to by the time our killer hand starts disguising himself with a hand puppet, Alba is stripped to her lingerie while stuck in a death trap involving a car being raised to a ceiling pentagram, and a more heroic use for marijuana. Clearly. Not. To be taken seriously.

Idle hands (1999) is definitely a movie made to be a brainless yet fun horror comedy, though there are moments where the two genres are a little uneven in distribution. The movie's entertainment value varies among taste, coz I'm pretty sure not everyone has a tolerance for dumb stoners. Anyone with a taste for bloody grue and gutsy laugh, however, will find a good time with this movie as surely anybody with a good sense in their head should at least know what they'll be expecting from a movie about murder hands. (So stop your whining big shot critics, learn to laugh for a while!)

Grab a bag of popcorn, open up a few beers and light that cannabis! When the day's Halloween and you want a good laugh, why not try five sharpened fingers worth of laughs and shocks that is Idle Hands (1999)?!