Let's play the Hiding Game: Dark Night of The Scarecrow (1981) 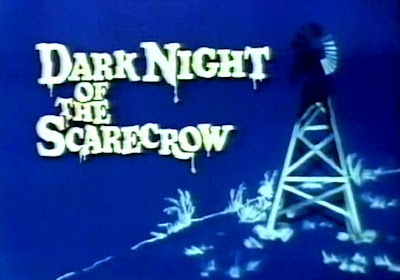 
This one's a keeper! A forerunner of the killer scarecrow slasher/thrillers, this little TV flick gave more chills and creep than most of any other killer scarecrow flicks out there. (save the underrated Scarecrows of 1988...which I also urge you, dear reader, to see)

The film opens with young Mary-Lee playing with a mentally challenged yet gentle man named Bubba (Larry Drake! I love this guy); feeling adventurous, Mary wandered off and sneaks into a garden to see a beautiful fountain only to be attacked by the owner's guard dog. Bubba went in, grappled with the mutt, and next thing we know, Bubba was seen holding Mary's seemingly lifeless body in front of the child's mother, crying his innocence.

Unfortunately, not everyone's buying his innocent man act, more specifically Otis Hazelrigg, a grouchy postman, and his trio of blue collar buddies who finds the man's friendship with little Mary is anything but sweet. Upon hearing the news of Mary being killed, the paranoid quartre rushed to finish off their so-called menace, who ran off home to his momma scared and confused. His mother suggests "the hiding game", wherein Bubba will disguise himself as a scarecrow to escape the lynchers but the persistent foursome had their way, cornering a frightened man (a scene that's both pathetic and awfully intense) before gunning him down.

Things didn't go as planned when the four hears from the CB radio that Bubba's really innocent as it turns out, he was the one who actually saved the girl. Stricken silent of their wrongdoing, Otis made it look like they were attacked and only defended themselves by placing a pitchfork in Bubba's dead hands.

True enough, the men were acquitted from their crime, much to the discontent of the simple man's mother and the district attorney, who finds their story far from believable.

Soon after, the men began to chillingly die off in a series of mysterious accidents one by one, all of them seen an unnerving image of the scarecrow suit that Bubba died in. Could it be guilt being played on them or by them? Or is somebody out for their necks? As these men plays a desperate game of survival and conflict, one thing was certain: they will all pay.

It's a TV classic for the sub-genre people, Dark Night of the Scarecrow is a film of good construct, merging the sensibilities of a ghost story with that of the bodycounting vengeance premises of a standard slasher, resulting to a creepy and chilling thriller. While blood and gore isn't the movie's highlights, the movie got the ghost story with whodunit approach done with an effectiveness that it keeps you watching and wondering whether it is Bubba doing it from beyond, or these men are just getting dangerously paranoid by the minute. The build-up of the movie certainly seems to be going to the latter's favor, as these men are devolving into either blaming others for the suspiciously increasing bodycount, or grow superstitious in a hysterical way. We never get to see who's doing it either, so the anomalous state of these deaths also adds to the intrigue.

Not to spoil much, I'm gonna keep my mouth shut for the rest of the movie in favor for those who hadn't seen it yet. I'm just gonna go long to say that the other commendations this film has is the performance of nearly everyone in it and a workable scary looking scarecrow suit. Them hollow eyes and mouth never looked eerie.

Track down a copy, own it, rent it, see it, do whatever it takes to catch this cult classic.

Bodycount:
1 male gunned down
1 male falls into woodchipper
1 elderly female suffers a heart seizure
1 male buried alive in a silo
1 male bashed on the head with a shovel
1 male ran through a pitchfork
total: 6
Posted by Kaijinu at 2:34 PM