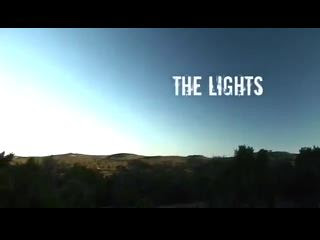 Once in a while, I find titles that not a lot of people seem to know about and I take both pride and fear on this fact. I take pride as sometimes said unknown titles can be real gems and I, in turn, can spread its goodness by covering it for you all. But on the other hand, I fear that I might be wasting my time instead, trying out a movie that may have a very decent reason for their obscurity. The Lights is one of these barely heard and/or discussed titles and, as far as I am concerned, I can't really decide where I stand in this.

In The Lights, we follow four teens driving through and enjoying rural America to find a perfect spot to watch a strange meteor shower later that night. While the youngins' go about their road trip, an enraged husband somewhere just killed his wife after finding out she's leaving him for another man, pushing this whacked-up widower to a killing spree targeting anyone who enters his property. This being said, take a wild gander where the teens will end up camping nearby that evening...

Now as simplistic as The Light's story sounds, I cannot help but feel there's more to it than what it is letting on. See, while a good bulk of the movie definitely acts like any slasher story would with teenagers being teenagers and a killer racking up a bodycount, once the third act starts in which our maniac eventually comes upon our protagonists, it got a tad weird. Can't really say if these will dwell into spoiler territory as I still have no idea what it all meant, but the anticipated meteor turns out to be more like floating glowing balls of multi-coloured gas (hence "The Lights") and the timeline of the road trip and our murderer's killing spree before the teens arrive was revealed misconstrued for some reason. Then it even got weirder with the movie's trippy final shot, leaving my brain on the fry trying to figure out what I just saw.

It's like the more The Lights slowly progresses to the end, the stranger it gets, and albeit it's a nice way to stray us off from the norm especially with how the film starts out like any other of its kin, a little closure to some of the questions it shoved at us would have helped me like this movie a bit better. What exactly are the lights and what is their purpose for existing in the plot? Apart the fact that they're the reason to have these kids go out (thus leading them to be hunted down by a hammer wielding nutcase) no friggin' clue and the movie just seems content leaving it at that. Mystery is fine and all, but too much unanswered ones in a single sitting may not work well for some people, especially when the premise of a story revolves around them.

I will admit it, however, that this lack of answers made The Lights slightly memorable, probably even more if it's odd scripting and randomly insane killer already did the trick. It's nothing that groundbreaking in terms of production as it is as amateur as some small budget horror films can be, but the characters are decently acted, there's a generous amount of cheese to cover some misgivings and the kills, though kinda tame, works quite alright with The Lights' strange tone. Given that the story does not entirely make a lot of sense, as a slasher, at least, it aimed for something new for our entertainment and whether it worked or not falls on who's watching. So though it didn't completely won me over, I'm not stopping you, dear reader, to miss the chance seeing this obscure oddity.