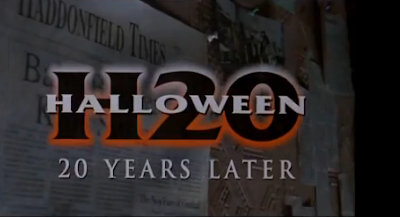 So, this was Michael Myer's own comeback for the 90s? Really? Why are every one of his comebacks so underwhelming?

Now, don't get me wrong, I remember liking this as a five year old kid back one Halloween night when my dad brought home a copy. I know it's the same movie cuz I recall the oh so shocking "beheading" of Michael Myers. But as a true test of time, I decided to rewatch this again two years ago, and again today as of writing, and honestly, I wondered if my dad just fast-forwarded the whole movie to the good bits cuz there are so many uninteresting fillers here. So. Many. Uninteresting. Fillers.

After finding her home ransacked, Marion Chambers, a colleague of Dr. Loomis seen in the first two Halloween movies, informed her neighbors of the robbery where in they called the police to drop by later and investigate. But whilst waiting, Marion finds some of her files on Laurie Strode, the survivor of the original Halloween massacre, missing and that she's not entirely alone in the house. Rushing to her neighbors for help again, she finds them murdered and that the killer's none other than Michael Myers. After a brief chase and a near close call on flagging down the police, Michael gets to her eventually, slits her throat and leaves right before the cops could get in.

We later find out that Laurie faked her death and changed her name to Keri Tate. She's now the headmistress of a private boarding school in Northern California and life's anything but roses for Laurie/Keri as the events of 20 years ago still haunt her, taking a hobble to her parental capabilities as a mother of a teenage son and as a girlfriend to her lover.

Now that Halloween is fast approaching, it's the holiday closings for the school and Laurie's son and his friends decided to hold a private party in the School's basement. Unknown to them, using the files he stole, Michael found his way to his little sister and soon, the Halloween night years ago will repeat itself once again...

As far as I'm concerned, I'm not gonna blame the producers on doing an entirely different approach; the movie is less of a slasher flick as it is more of a character study around the first two thirds, focusing on Laurie's turmoil from the night her brother came home. I'm guessing the filmmakers wanted a sequel, or an alternate timeline, that will cater for both old school Halloween fans and the new generation wave of slasher fans, courtesy of Wes Craven's Scream. Unfortunately for me, this means slow burning the story on Laurie only to feature Michael in the last act in his honest-to-God slasher-y goodness.

Not the best approach since it means giving less screen time for the rest of the casts, including the boogeyman who started it all, thus overdoing the drama that is Laurie and Michael's odd family matters, tying itself too much from the original and overdo the details to the point that it is kinda annoying. The mother-son conflict is also a tired run as I saw this act too many times, with the one tackled here hardly making any dent to the sub-plot.  There is also a stab at alcoholism to give Laurie some depth, but, um, when was the last time that wasn't done, too?

What I can highlight from the movie, however, is how it managed to flow quite nicely around the last act; sullen the plot may be, even an unsatisfied fan such a myself can't deny on how good the climax is with its surprisingly shocking finale that divides fans on whether accepting this or not. Personally, I hate to see Halloween end with a movie as dull as this but yes, this should have been how it all ended. (Seriously, why has it nobody ever thought of just cutting off Michael's head instead of shooting him repeatedly? Isn't his very existence right now already a proof that he can survive bullets? As invincible as he is, why not cut off his head then?) Then there's the Tim Burton-esque variation of the theme that I learned to enjoy through its haunting tune and a cameo of Ms. Curtis own mum Janet Leigh!

Scream may had added a new sense of wit to the slasher genre of the 90s, but that ain't no excuse to jump into a fray and do every trope religiously. Halloween was a slasher movie, from head to toe. H20? It's only a third of a slasher flick and more in common to any MTV teen angst series, only with a middle aged mum in place of a bratty teen girl. I love Jamie Lee Curtis, she's a wonderful actress (despite not embracing her horror flicks pre-Hollywood life, which is bad juju if you ask me. You don't bite the hand that fed you, Ms. Curtis...), but not even her performance was enough to save this rather overcooked mess of a meal.

Halloween fans may clamor, but I'm sticking elsewhere in this franchise. Least it's better than that lame "middle child" Halloween 5: Revenge of Michael Myers...