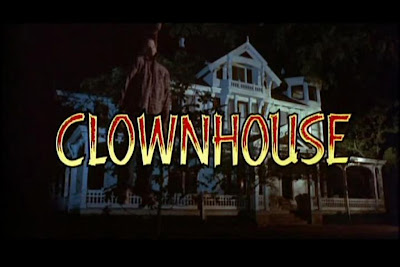 Beware, beware, in the darkest of dark
though the flesh is young and the hearts are strong
precious life cannot be long
when darkest death has left its mark.

What is it about horror movie clowns that attracts me to them?

Every now and then I ask myself this question as I watch this movie, or any other clown-themed horror flicks and I always conclude with the same set of answers: Lon Chaney and his epicly true quote: "A clown is funny in the circus ring, but what would be the normal reaction to opening a door at midnight and finding the same clown standing there in the moonlight?"

Perhaps controversial director Victor Salva had this in mind when he made this slasher?

It was a few days before Halloween when three brothers were left alone while their mother decided to accompany their father for work. The youngest, Casey, lives a life influenced by his uncontrollable fear of clowns, while his two older brothers, Geoffrey and Randy, have contrasting views to his phobia; while Randy sees this as a nuisance and an embarrassment, middle brother Geoffrey tries his best to help Casey overcome this and be there for him.

On that night, a traveling circus just happens to be near town and the three boys decided to visit it despite Casey's coulrophobia. But unknown to them, three escaped mental patients find their way to the same circus that evening, with one of them learning a trick or two watching a balloon artist at work, and eventually murdering three clowns before taking their identities. They make their way to the boys' house, forcing Casey to confront his fears and his brothers to fight for their lives.

There's very little to say about Clownhouse; the plot is genuinely linear and the gore count is very low, pretty much packing little in terms of exploitation compared to the excessive splatter and cheese most late 80s slashers dunked themselves in.

Instead, the movie focuses more on technical simplicity, character, and building as much suspense and psychological nightmare as possible. With this, Clownhouse succeeds not only as just another slasher film, but also as a more general horror flick for the reason that it manages to capture the intensity of fear itself by having the villains target hapless pre-teen children while looking the least threatening. It provokes imagery that's heinous and ultimately disturbing, especially for those with such childhood nightmares. (Such examples would be the bit where the three clowns plays in the middle of the night with a prop noose (through a window, no less), or that of an eerie shot of a hanged child-like figure in the middle of the dark)

A second working element of the movie is it's near absence of explanation, an exercise of fearing the unknown as little information was given to why the boys' mother have to leave them other than she has to work with her husband, as well as the point that the escapees lacked character and depth, with their pre-painted face shown mostly off-camera or obscured, thus making them random boogeymen with no rhyme or reason. How they even managed to end up to our lead's house could have been just an unexplained stroke of randomness and pure (bad) luck, a practice tackled in Black Christmas (1974) and too with the original Halloween (1978), wherein a similar random encounter had victims befalling on the hands of a faceless killer. (Before sequel and/or reboots explained almost everything, that is)

With looming camera work and cinematography, the movie often serves these as its true highlights over its lack of blood and the usual T&A, which can double as the only drawback depending on your taste in horror flicks. While the kill count is fair, the movie's killing spree either happens off camera or is implied in camera shots, showing these clowns' sudden interest in balloon animals by twisting heads (or body parts) beyond their usual rotations in the aftermaths of each kill.

If you know your horror history, you can also tell why this movie gathered some sort of infamy among fans; the film's director Victor Salva, before his Jeepers Creepers fame, stood under the charge of molesting the lead child actor, Nathan Forrest Winters during filming. Normally, I put aside personal issues concerning directors as I see very little relation between a man's directorial mastery with his personal life, but it does show the influence; random costumed men stalking children, it's a disturbing and realistic situation, made worse with the director's now tainted image as a possible pedophile.