The Lake, The Witch and The Cross: Superstition (1982) 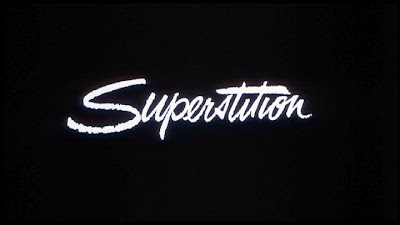 One of my fave 80s entries. I wouldn't trade it for any cheapo cheese fest the world's gonna offer me. For me, this has to be one of the most nearly perfect blending of supernatural hoohas and slasher panache.

Opening with a duo of prankster scaring the wits out of two lovebirds; the jokesters, in turn, find themselves as the next victims of a vicious force living inside the nearby Sharrack place. One gets decapitated and had his head baked open like a potato, the other crushed by a window pane while a figure repeatedly stabs him in half.

Okay, so apparently said house is owned by the church and is scheduled to be renovated and fixed-up for a minister and his family. A priest and his young friend, David, tries to keep things in tip-top shape, but with these murders going on, a local detective hangs around with his men, suspiciously eyeing on the mute handyman who lives close by and helps with the workload. Of course, we can tell it's not him, unless he possess the ability to make buzzsaws come to life and slice through a preacher's chest, but otherwise the renovations are soon completed (despite the death toll climbing higher) and the minister moves in with his wife, a bratty son and two leggy daughters.

Taking a dive into the strange happenings, David begins to look up into the place's history, which mainly involves a witch, a plague, and a pastor being crushed to death in a giant wine press. To make things worse, he finds out that a steel cross he pulled out from the pond after it was drained actually kept the evil witch's spirit at bay. It limits her mayhem to that around the house only, but once removed, it will set her loose to kill anywhere and anyone as she please.

Superstition is a film of two identities; the first half, though bodycount littered, is more of a makeshift barrage of haunted house horror ala Amityville Horror, complete with objects moving on their own and premonitions of bleeding knives stabbing though ceilings, a bit of Satanism ala Exorcist and some pre-Final Destination deaths by household items. Around these parts, he film relies on some Gothic elements such as dark corners, creaky floorboards, windows opening and shutting by themselves and a looming atmosphere that often feels the presence of an evil being. It even heightens the tension during some certain scenes with a wonderfully composed score that's both medieval and Satanic in tune.

After a while, or more specifically after a series of flashbacks foretelling the house's Satanic history, the film shifts to a fast paced supernatural slasher, with a cloaked and clawed witch mauling and staking anybody that gets in her way, with said killings perhaps the biggest highlight of it all. We get gruesome gore delights as exploding heads, hacked up bodies, possessed buzz saws, exploding mirrors and a brutal head staking filled evenly all through out the movie, with practical effects so surprisingly realistic that you got to see it to believe it!

A flawed production, yes; it's an awfully cheap movie that suffers from a cheesy plot tainted with holes and very dodgy acting, but Superstition is so crazy, fast paced, and most importantly, gory enough to make you look pass these shortcomings and just enjoy the movie itself as a cheddar guilty pleasure of all things camp. Other words, a perfect example of a popcorn movie!

If atmospheric horrors, with lots of blood and mindless violence, is what you're looking for, then look no further and try your hands with this bad boy!

Bodycount:
1 male found decapitated, head baked in microwaved until explodes
1 male caught on a possessed window, cut in half with a knife
1 male pulled into the pond, drowned
1 male gets a possessed buzzsaw slice through his chest
1 male hanged on dumbwaiter pulleys
1 female drowned (flashback)
1 male crushed by a giant wine press (flashback)
1 male killed offscreen
1 boy found murdered
1 female bludgeoned to death
1 male had a mirror explodes on his face, impaled on shards
1 female gets a wooden stake hammered to her forehead
1 female found with throat cut
1 male pulled into a pond, drowned
Total: 14
Posted by Kaijinu at 6:01 PM