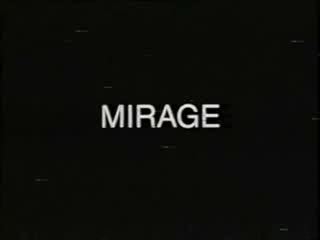 I recall this title. Very rare indeed. But is it worth finding? 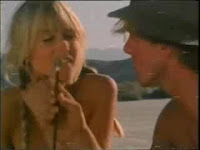 Somewhere, in the barren desert, a bunch of teens boogie down to the desert to camp out on their vacation, basically a variation of the usual backwoods premises, only, instead of the chipping woods, we're practically doing every camping cliches of sex and games in the desert. Aside from this, we also have a quarrel over broken love lives, with the two dudes, brothers actually, fighting over bicker ends about some squeezes. But when the night ended with the older bro and his new girl leaving out of a fight, things finally kicks in; a black van, returning from earlier, began stalking the two teens at the pitch blackness with only the headlights giving way to the action. 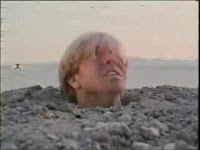 When these two kids met a grisly demise, the black van makes its way to the rest, forcing them to flee and be hunted in the hot desert. But are these kids really seeing a killer? Or is it just...a mirage?

Mirage was a good title, honestly. More often this title is called the slasher version of Spielberg's cult flick Duel, a road thriller involving a cat-and-mouse chase between an ordinary man in his car and a murderous truck (and its driver?). Now, in a way, it is true, we got peeps being stalked and chased by a ghostly vehicle, with the unsettling ability to disappear and reappear with ease. The only difference is that the driver of this black van take his time to do the actual murders himself, answering much the slasher part of the movie. 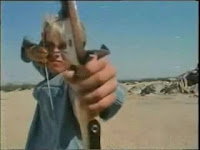 While certainly not the first desert slasher ever made, not with titles like Death Valley, The Hills Have Eyes Part 2 (1985) and Blood Frenzy beating it to the golden years, the whole premise of a stalk and kill in the open lands is a tough ride to begin with. Throughout the whole film, the dead and chillingly open desert adds an isolated feel to the story, a sort of no-escape prevalence, but sadly, Mirage is just lacking so much thrills to make it any enjoyable or workable. After the first two kill, the story slows down to just two characters walking around, trying to find a way out of their predicament as the black van continues its sinister stalkings. It's should be a nerve-wrecking experience, but the film's execution just made it very tedious, and sometimes, even boring. 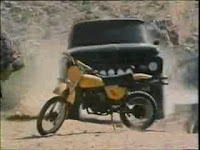 The kills are little in count, and some are even done offscreen, a fact that didn't really much help levitate the movie. There is, however, it never skipped the red, and one or two kills did stick above the rest. One fine example had a guy buried up to his neck while the killer torments him with a hunting knife, and just when we thought we'll the get the usual throat slitting, he then dropped a live grenade before walking away. Though the execution was off-camera, we do get the bloody result later on the movie. 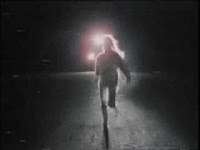 The climax of the film is where most of the action is, but regardless, it still felt a little silly thanks to the killer. The point was that the whole film tried to obscure the killer's identity; keeping him mute, with the shots of his hands and boots are the only ones shown in camera for a while, but by the time we get to see him, he's really just a random dude with an inept personality and a nasty habit of chucking sun-dried skeletons over our leads. Now, I don't see much of a problem from that; heck, he even impressed me when he easily lived through getting an arrow shot through the mouth and out the back of his head, but I was kinda expecting more intimidating than an idiot with a knife. 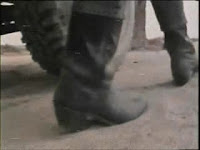 Mirage then decided to end itself with a big question both to its survivor and to us: was there really a killer? The ending shot of the movie, wherein the black van roars as it drove out in the sun seem to imply something, but never the less, the film just fails to explain.

So is Mirage worth tracking? Well, it's certainly an obscure film, with a title so basic and overused, it's no wonder it's hard to track, and in a way, Mirage is the example of a desert set slasher that works on a creep factor, giving very little clue to everything that's happening that it's almost a nightmarish in feel. It's momentarily scary, bloody even, it's hard pointing out where the film really flopped in; Eitherway, Mirage had achieved some cult status due to its rareness and, well, its hallucinogenic nature, so if trippy horror flicks is what one wants, then I could recommend this one a track. If you could catch it. 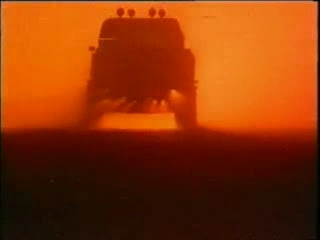 Bodycount:
1 male buried up to his neck, head decimated by grenade
1 female found with throat cut
1 male limbs chained to a van, torn off against a tree (dream)
1 female found with a nail driven to her head
1 male ran over by van, gunshot to the head
1 male shot twice with shotgun, stabbed on the neck with arrow head
1 male arrow shot to his mouth and through his head, stabbed to death with hunting knife (debatable)
total: 7 (?)
Posted by Kaijinu at 5:30 PM