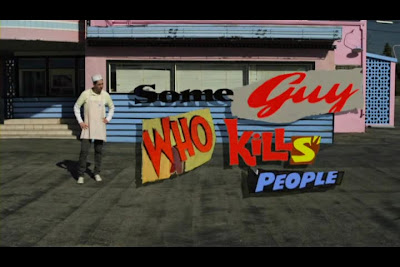 Well, with a title like that, I was expecting something different. It may sounds like a pretty straight forwarded satirical comedy but the actual story was more than that.

It tells the life of Ken Boyd, a recently released loonie who embarks on a life of revenge while juggling his personal life as a loner. He works on a malt shop, lives with his mum and spends his free time drawing really good doodles. (Sounds sortah like me save that I work fixing TVs over the phone. Now I'm intrigued!)

A few days gone since his release, the people responsible for putting him in the nut house starts to turn up murdered in quite a brutal fashion. On the case is Sheriff Walt Fuller, whose methods of figuring out these crimes are as estranged as his reactions to them.

All the while, Ken finds out he has a daughter, who recently just ran away from her mom, Ken's old flame, and step-dad hoping to find a better and more promising life with her mysterious father. Now Ken's life begins taking a new turn; with a daughter to take care of, his thirst for vengeance is now at the ritz and Sheriff Fuller, who is seeing his mum, is starting to get suspicious of him. So can Ken fulfill his vengeance, or have a better turn in life instead?

Other than the wittingly straightforward title, the thing that got my attention from Some Guy Who Kills People was John Landis' involvement as its executive producer, which is more of a presence all over the film. It's been a while since I've seen Landis in a horror project and this little number, though directed and produced by an entirely different crew, surely captured something more worthwhile than your average slasher flick.

While labeled as a horror-comedy, one can't deny Some Guy's heart string approach. It's all about family in this one and not the kind that pulls you into their meat shack and cut you up with a gasoline powered saw, but more of a broken kind who lost each other through communication yet doing their best to fix it. There's nothing pretty fancy about the production in general; the cinematography is good, gore effects is quick and cheap, and the pacing's built solely for character development. (As in very steady) In turn, the concept is thought provoking, highlighting on the dangers of living in the past and missing out on the important things in the present.

In a way, Some Guy Who Kills People is a horror movie in vein of serial killer-slasher hybrids like Henry: Portrait of a Serial Killer, Maniac (1980), Tony (2009) or even Angst (1983), where the story's general focus is on the anti-hero and his everyday life, both average and not. His love life, his family, his work, all of it given more emphasis than the actual killing spree. I admit that the fatherhood angle isn't entirely new, with the likes of The Stepfather series (and one underrated remake) and Scream for Help (1984), but Some Guy did this in a rather new light: instead of a killer covering up his murderous ways as a dad, we instead have a killer trying to fit in as a father. It's intense, really, but intriguing enough of a premise to have me watching until the end and see the whole outcome, as the rather unsympathetic looking lead slowly tries figuring out this new page in his life. That being said, those expecting a gore-on slasher flick will be mildly disappointed as the film resembles more of a family drama than a hack-a-thon.

Some Guy brought up some familiar faces in the horror industry; one may recognize Lucy Davis, that lovable actress who helped Simon Pegg and Nick Frost act their way through a horde of zombies in Shaun of The Dead, and too Karen Black of the House of 1000 Corpses fame, as Ruth Boyd, Ken's disappointed mother. We also have Rocky Horror Picture Show's Barry Bostwick as the small town sheriff, whose quirky remarks on each murder lightens up the sullen mood one at a time.

The finale gives us a twist that seems to work well with everyone and, honestly, I can't ask for anything more than an ending like that. As a small game-changer, Some Guy Who Kills People is a refreshing take on a slasher; I never knew moral warnings have a place for this sub-genre, but I guess it's possible since we now have a beautifully crafted tale of subtle black humor and family bonding such as this. If you're very open to changes, and very patient, you might find yourself a gem right here.

Bodycount:
1 male gets a hatchet to the head
1 male decapitated with machete
1 male knifed to death
1 male had his throat cut with knife
Total: 4
Posted by Kaijinu at 1:25 PM