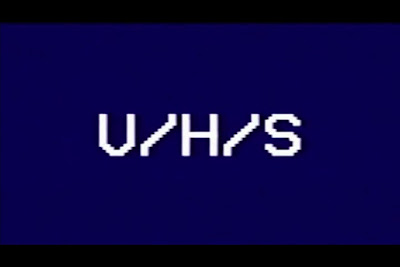 With the recent trend of never-ending found footage horror flicks, I struggle to see the whole point of the horror sub-genre: we see random people smile at cameras, look scared at some random shit that we couldn't get a good look at, running, more running, screaming, more screaming, random moment here, people dead. The End. 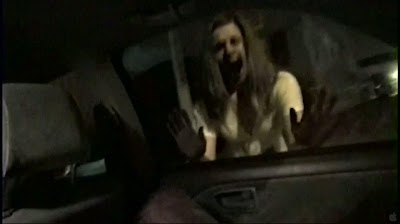 We know these footages are fake and yet we have one or two indies trying to pass their own realistic vision of horror as real as possible, which is a gimmick that gets tiring real quick nowadays. Perhaps this is one factor that V/H/S succeeds in as it attempts to do something wilder and more unpredictable with its idea of a found footage anthology. Did it work, you may ask? I will say "halfway".

V/H/S is told in a wraparound called Tape 56 involving four hired thugs ransacking a house in search of one VHS tape. The problem is that the guy who owned the house (apart from being found dead in his sleep) had more than one tapes scattered and hidden all over his abode. While the main thug searches the basement, two of his cohorts stay behind with the dead owner, viewing the tapes he left next to the TV which, of course, will be the rest of the movie.

This wraparound is, in all honesty, tedious. It starts rather nasty with the thugs harassing a couple, one group holding back a girl's boyfriend as the rest molest and flash the girl's breast for a porn site, before moving our attention to them messing up another house and then finally proceeding with the segment's "plot". It's hard to root to see this guys get their just desserts in found-footage format coz, well, we never get to see it clearly. Strangely, this segment ended way before the movie itself does, with the fifth tape acting as the film's finale, which not a bad thing since this wraparound hardly matters.
The first segment, Amateur Night, is recorded through a pair of camera glasses and focuses on a group of young and party hungry men who decided to pick up their own one-night stands at a bar. They came home with two, one willing but passes out drunk and the other, um, too big-eyed for my taste, but equally unsettling once she starts to spat out cat-like hisses and animalistic growls. If you know damn well where this is going, then you know she ain't what she is and there's gonna be blood...and flying severed penises.

A fun way to start a decent anthology. I like the director's decision to cut down the party part so we can get to the horror part as soon as possible as gory cannibalism and a disturbing "split face" creature was a sight that gave this segment a good way to set the whole movie up for us, though with a rather messed-up porno angle.
Our second Segment is Second Honeymoon, about a married couple trying to find some time alone together at an Old West themed community, but finds that one of them is harboring a deep secret that eventually leads to murder and a tooth brush being dipped into a toilet. I wasn't inventing that last part. Ti West directed this segment, which makes a lot of sense given the movie's pacing and creeping nature. Sadly, while the stalker thrills does come with a level of unease, the whatever horror it is trying to strike wasn't memorable as it ended with a dull blade of a twist.
The third has to be my favorite segment, not only because it's a slasher, but also for the villain. Tuesday the 17th records the final moments of four camping teenagers as they fall prey to a supernatural killer known as The Glitch, who has the ability to teleport, distort his whole image from recording devices and apparently immortal. While the kills are good and the villain is an effin' badass, it could have gone a little longer than it was. That, it I might be too familiar with the slasher genre that this segment felt rushed and awfully short, or at least falls short. Still be best for me, though!
The fourth tape, lengthily titled The Sick Thing That Happened to Emily When She Was Younger, is a recorded Skype conversation between long-distanced lovers, one of who begins experiencing supernatural scares at night and receives a strange bump on her arm, which reminds her of the same kind she got on her leg some time ago. One night, she tries to confront the haunting as it continues through out the course of the short, only to be attacked by two child-like figures and a rather unexpected twist. The short is good, heavily inspired by the Paranormal Activity flicks, only with a stranger curve ball thrown at us and more eye-wincing scenes that involves self-bodily mutilations and impromptu operations. While I'm a very little fan of supernatural found footage pictures (save the first Paranormal Activity and Blair Witch Project), this short is sexy and sick enough for me to enjoy it. Especially the new girl at the end.
The last tape, which plays after the end of Tape 56, records the events that took place at 10/31/98. A gang of friends heads out to a Halloween party at a stranger's house, thinking it's a haunted attraction, and interrupting what seems to be an Satanic Rite. Soon, they undergo some bizzare haunting (including shrinking doors and arms growing out of the walls) as they escape with a captive woman, only to realize the grave mistake they just made. A funky and silly way to end an anthology, 10/31/98 felt too cartoonish around it's horror half, completely in contrast to its tension filled first half, but it mostly works. While the early scenes had some creepy imagery in it, the latter parts unleashed CG crows and supernatural haunting, while visually good, is far from scary or creepy and just, well, campy.
Overall, the movie has its appeal. While the authentic feel of this style seems to water down over the years, the Found Footage shorts still managed to surprise, shock, titillate and entertain us with some good scares or just plain fun. V/H/S made it work by making sure each of these shorts are, well, short, saving us all the time of over-cooking build-up and give half-and-half of the development and scares. It's a little bit of something for everyone, while not entire in whole chemistry with one segment to another, but a mixed-nuts bowl horror movie that's refreshingly watchable.