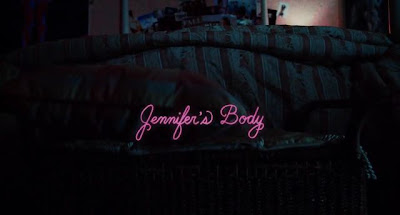 In the small sleepy town of Devil's Kettle, lived two girls who are the best of friends; the shy, conserved bookworm Needy Lesnicki and her posh, cheerleader friend Jennifer Check. The two girls have almost nothing in common, with Jennifer having the body that gets the boys drooling up to her, while Needy only has (other than her books, her glasses and her boyfriend, Chip) the sheer will and friendship with Jennifer to live with in her near non-existent life. 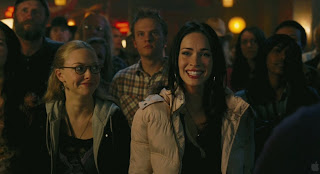 However, one fateful night will drift them further from one another when a mysterious band called Low Shoulder comes and a freak fire accident mysteriously starts in a bar full of townsfolk and teens. Needy and Jennifer were at the scene and no soon after the fire, the band takes Jennifer "home" and, somehow, turned her into something worse: a flesh eating demon thirsty for the blood of young teen boys.

What I saw in Jennifer's Body is the very same type of teen-oriented horror flick that nearly flooded the late 90s, though with the restraints on realism bent and more humor added in vein of morbid and cheeky tones, all the while still retaining that cynical teenage garbles. 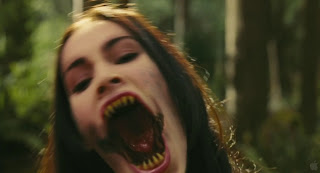 First of, the film stood its ground on two of its main casts: as Jennifer, Megan Fox have the looks and created a gal that is the ultimate queen bee with some personal issues. Not much is said, but regularly hinted that she's not all right with her life as a cheerleading "it-gal", allowing Fox to try and be "flexible" enough to be hot, funny or miserable when called for.

Second in line is Amanda Seyfried as Needy, Jennifer's bestbud since kiddie days and probably the only thing keeping Jennifer going even before she got possessed by a demon. What I like about her is that, in a context, she's much like Jennifer; despite being awkward and nerdy (check out those horror posters in her room! Evil Dead FTW!), she's actually just as complex and pretty as her admired buddy, even as far as being comparable. Seyfried did a great job making this character funny in that natural, snarky teen sense, even as she starts to deal with the changes going on with her life and of Jennifer's.

Now, setting aside the strong performances of its two female leads, Jennifer's Body is often compared as the Juno (2007) of horror flicks, not very surprising since the film's writer just so happen to be the same gal who penned the aforementioned teen flick. The result is a quirky, pop culture oriented film done in an angle of bloody mayhem and gutsy slasher narrative, giving out some sincere moments between casts while impressively dishing out some gory kills. The only problem, though, is that the film has its moments where the humor isn't that catchy and the main focus on the two leads leaves many of its cast either thin or annoying. (Like that dorky girl who claims everything in Wikipedia is true. Lies. Bitch, not everything in Wiki is true! Heck, it once called The Innkeepers a slasher flick. Slasher my ass...) 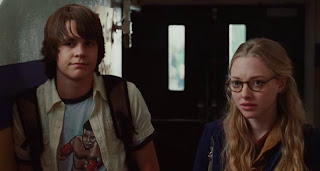 The male casts have their moments of recognition; Adam Brody as the lead in the band Low Shoulder created a character that's quite a charm in the eyes despite his little hidden agenda and overall smugness. Johnny Simmons played Needy's love struck buddy Chip, who despite his minimal screen time, is all the nerdy rooting one can ask in a teen flick. (Although he has a long way to go on being as respectable as Derek from My Super Psycho Sweet 16 (2009) or even Randy from Scream (1996).)

Now concerning its grue, I have very little to complain about; it's CG viscera for some but it's not as obvious as some computerized gore ends up. The killings are either done off-camera or obscured and, strangely, the build-up and the impact has more on dark comedy in it than fear. Yes, there are moments of grief, especially that one funeral scene where a mum shows her bereavement over the realism of her son's death but, more or less, sometimes you may get a chuckle or two with some of the film's own comic mechanism, not that it tries to hide it or anything ("Lasagna with teeth"?), which may also reckons some to disagreement. 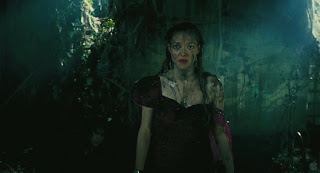 Jennifer's Body isn't exactly for everybody; the jokes may not appeal to everyone within the mind set it's aimed at, especially since the film's mix bags genre of comedy, teen drama and horror's jumbled all over the plot. I'm not even sure myself what to make out of this film, other than the point that I did enjoy it to some extent, but I can agree with many that the film lacked surprises with its predictability and many slasher cliches.

There were also some unexplored themes that the film started out with such as High School politics, feminism and even Jennifer's own social life outside her flesh-eating side-persona, all left alone due to the narrative's main focus on the rampage through Needy's point of view. It would have made a more interesting watch if we actually found out what made Jennifer tick as the whole thing was just hinted between scenes.

Still, anyone looking for easy entertainment that relies very little on the grey matter and more total teen drama, cheese and dabs of humor, Jennifer's Body might count as one. More of a teen comedy than horror, despite the gore, dread and supernatural subtones, there's no denying it's still aimed for horror audiences and it's still a passable one at that. Just look at it this way: it beats watching Twilight.