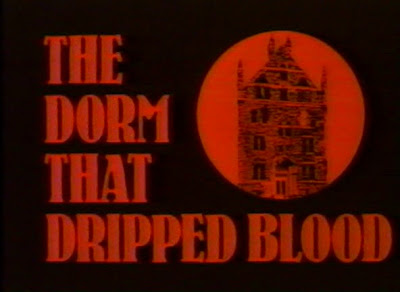 Our opening: a gang of random teens jeep-riding to someplace, which honestly adds up to nothing as the movie would later turn our attentions to a broken down dorm and some guy getting attacked by a killer who proceeds to slice his hand in half.

We can easily assume he gets killed since nobody bothers to point out this deed as soon as we are introduced to four college kids, volunteers in cleaning up the aforementioned dorm as it's scheduled to be demolished some time in the near future. While I'm still having a hard time trying to digest how a building this big gets counted as a dorm, the gang goes around with their business, getting themselves freaked out by the creepy looking caretaker.

At some point, these thespians start to get picked off one by one without the rest noticing until it's all too late. One of these scenes happens to be my favorite for reasons that it's so darn nasty, cheesy and downright mean: when it involves the parents of one of the volunteers driving by to pick her up, only daddy gets the pointy side of a nailed baseball bat over and over the moment he's halfway into the building. Not satisfied, the killer then shows up behind dear mum and garrotes her with a thin wire, just minutes before their teenage daughter sees the horrid fate of her parents, fainting at the sight right behind the car. Perhaps the most convenient set-up I've ever seen in a slasher flick since the looney easily backs the car up, crushing her head like a rolling pin.

As day break, those who survived long enough still have no squat of an idea to what happened to their friends so they just keep on to working. Until dinner that night, wherein they get disrupted by malfunctioning lights and somebody seen skulking around, finally realizing there's a killer on the loose and they're on the pecking order!

The Dorm that Dripped Blood should have been a higher rated slasher flick for my taste; cheese and kills are my two top redeeming factors and the film has both, but my beef with this movie is that it hardly has any engaging characters and it takes a painfully paced hour or so before the good stuff kicks in. A lot of senseless speculation on the creepy guy (Then again, why not? Have you seen his hair?), uber muddled with cheesy acting, very thin plot, no sign of a script, and the tick-from-the-list cliches, it's hard to give this film a passable grade if all of this is a little tiresome to sit through but can be generous and give Dorm some commendation go for  the gore alone.

In fact, the good gore in this film is its saving point. Luckily for those who have this mindset, Dorm is blessed with enough budget to do the nastiest fake blood gags and brutal kills to keep a bloodhound happy. Add an equally depressing ending involving cooked meat, a hilarious death by industrial steam cooker (No connection to Sleepaway Camp), and a killer's motive that a little overdone, you'll have yourself this cheese classic that has fans clamoring about it and me watching in an occasional basis as an answer for my need of bloodlust.

Bodycount:
1 male killed, hand chopped in half with a machete
1 male had his head beaten with nailed baseball bat
1 female garroted to death
1 female had her head crushed with a car
1 male gets a powerdrill to the head
1 male dismembered offscreen with machete
1 female boiled to death in steam cooker
1 male bludgeoned to death with wooden board
1 male shot on the head
1 female burned inside a chimney
Total: 10
Posted by Kaijinu at 5:35 AM