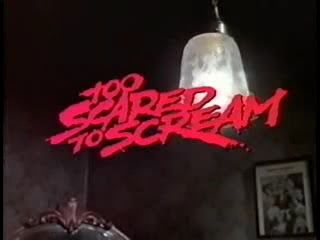 Not sure how much was the budget for this 80s indie but at least it had an air of pride to try and be something more than another teen-kill slasher, much to the strangeness and added attempts of high class seriousness. 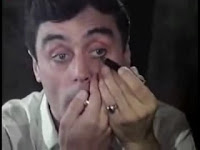 Too Scared to Scream opens with our doorman, Vincent (Ian McShane), applying eyeliners and blush-ons while a song title "I'll be there" by Charles Aznavour fills his room through a vinyl player. A tad weird but it got my attention nonetheless. 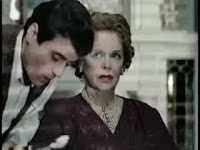 For this one night, our Shakespeare-quoting doorman suspiciously eyes on a well-dressed occupant who steps into the hotel after turning down on her "client's" advances. One gratuitous shower scene later, said lady suddenly meets a grisly demise at the end of a knife, a murder Lieutenant Dinardo (Mike Connors) would come to investigate later that morning and suspects the Vincent as our killer. (You would too if the guy celebrates his mute and paralyzed mum's birthday by cutting her cake with a big-ass kitchen knife and gorging it down to her mouth. Not really subtle, mate, not subtle at all.) 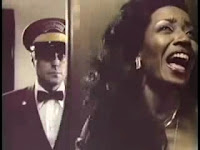 Of course, there are other suspects; the limo driver from the beginning of the movie somehow got tangled in but either ways, Dinardo sent out his pretty-face follower, Kate (Fatal Attraction's Anne Archer) to try and bait Vincent out into revealing what he did. Had he really been moonlighting as a murderer? Or is there another psycho on the loose? 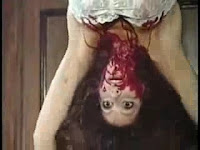 The kills are okay least to say, bearing some good blood but lacking the creativity. (nearly all kills are knife kills) There's also some sleaze here and nudity there, though it's clear that the film boasts a lot of cheese, though not as cheddary as the likes of flicks like Prom Night or Night of the Demon. There's nothing much to say about this film apart from the silly attempts to be a serious, sophisticated flick, attempting to merge brooding detective works with the conventions of a slasher film that never really failed to entertain or made our heads tilt with our tongue placed in our cheek.

Too Scared to Scream is a good run if you're looking for a movie with little scares and more on shallow-headed entertainment. Look past the pacing and writing issues and you might have a one-nighter rent on your hands here.