Sugar Plum Unicorns: The Cabin In The Woods (2012) 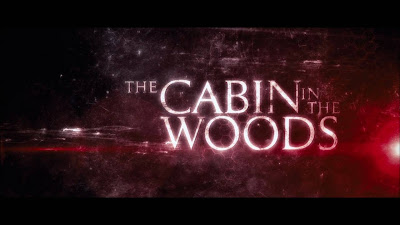 
Though not a slasher as a whole, but with a gore count as high as Kingdom Come? What's not to love?

Five teenagers rent a cabin in the woods somewhere for some R and R; with a little swimming here, dope there, plus a hottie making out with stuffed wolf's head, the kids then find a cellar door leading to a secret collection of mysterious and unsettling artifacts. One of them was the diary of the Buckner clan, a sadomasochistic zealous family who somewhat cursed the land the cabin was built on and, by chanting the Latin incantation written in the book, bound to come back to slaughter anyone in favor of their beliefs.

Evil Dead much? Yes, yes it is. And surely enough, incantations are recited and the Buckners return from the grave to massacre the teens.

But something else is cooking; behind these wooden walls, an entire organization is working to keep this "horror film" as cliched as possible. They make sure the kids split up when shit hits the fan, or have sex in the open woods, but "why?" is the big question here, and for "who?" Little to these teenager's knowing, the Buckner clan or these people are nothing compared to what's gonna go down by sunrise...

Generally funny, and pretty intense, The Cabin in the Woods defines horror in a comically aware matter; every cliches known from the genre, from stereotyped victims to gore and scares, Cabin pushes  every button and reconstruct it to satire the very genre its playing with a wink. What adds to my joy is that this movie chose s to satire slasher films in its majority, perhaps the most cliched and rule-obidient sub-genre ever created next to J-Horror. (said Asian genre hilariously took a bigger stab in the gut in this flick, by the way)

One fine example to this claim is the targeted teens; they didn't start out like the stereotypes that get killed off in these movies, but instead they're forced to become these stereotypes through any means of subliminal messaging and pheromones. It's kinda hard to explain why without revealing the twist, but to set things straight, I would say that the matters are far from simple than just people making a horror show in reality, but with all these dangers, you can't help but root for these teens, especially the last two "survivors" with their retractable bong swinging way!

Now, I myself is a fan of movies that feature more than one colorful villain, like Neon Maniacs or The Hills Have Eyes redux. Cabin has the liberty to answer this call and joke around into filling the flick with as many absurd and imaginative creatures to be featured in a single helping. The Buckners, AKA Zombie Redneck Torture Family, served as the film's first choice baddies and, me giddy, just shows how much Americans love their slashers as this clan hacks and slash their way through the teens in full gory glory. While these murderers hunt these kids around in the first half, the next half answers every trope known in the horror business, featuring an army of creatures from every horror sub-genre known to man, and I'll assure you this, it's not gonna be clean.

The finale, depending if you're the kind of guy who looks into the spoilers or was lucky enough to see this flick in advance as I did (Curse you, Philippine distributions!), would either be something you  expected or did not. All in all, it'll depend on how well you take and understand horror.

Since Cabin's well received by general audiences, and more by horror fans who warmly accepted the fact that this flick never bothered to be scary at all since it is deliciously entertaining, I can easily say that this number did its job as intended! A clever flick that some are addressing as The horror flick of the decade (some claim it the best of all time, but let's not get over our heads now...), Cabin in The Woods is a definite one-of-a-kind movie that is a must see for all! No exceptions. You miss it, I'll sic a Unicorn at you!

Bodycount:
((WARNING! MAY CONTAIN INFORMATION THAT DOESN'T MAKE SENSE))
1 female decapitated with a logging saw
1 giant ape seen dead
1 male slams unto an electric force field, disintegrated.
1 male gets a garden trowel through the neck and chest
1 male had his head bashed against the wall, presumably killed
1 male gored by an angry molesting tree and killed. Blood gush seen
1 male had his soul torn off from his body by a levitating witch
1 male dragged away and killed by a dragonbat
1 male clawed by a werewolf
1 male mauled by a werewolf
2 males dismembered by a buzzsaw killbot
1 male crushed to death by a giant cobra
1 male swallowed whole by a giant cobra
1 male devoured by zombies
1 male torn in half and dwarf tossed by dismembering goblins
1 male killed, blood splash seen
1 male attacked by an alien creature
1 male thrown to and swallowed whole by a giant cobra
5 victims seen killed
1 male glimpsed hanging upside down, to be killed by hell lords
1 male slashed by a buzzsaw killbot (mostly offscreen)
1 male seen vivisected with scalpel
1 male glimpsed attacked by reaver
1 female shot to the head
4 males and 1 female seen bound and doused with gasoline, burned
1 male glimpsed getting vomited on with toxic waste by mutants
1 female glimpsed attacked by a humanoid reptile
1 male glimpsed attacked by a walking torso
1 male glimpsed caught and dragged away by a possessed tree, killed
1 male and 1 female glimpsed eaten by zombies
1 male glimpsed on fire
1 male glimpsed being asphyxiated with a plastic sheet
5 victims seen killed by a sugarplum fairy
1 male seen killed
1 victim seen killed, body part raised by a pair of goblins
A number of individuals seen being attacked by monsters
1 mutant shot on the head
1 male devoured by dragonbat
1 male seen being stalked by a psychic
1 male had his neck mauled by werewolf
1 male gets a knife to the gut
1 male glimpse dead
1 female stabbed with knife
1 male gored by unicorn (WIN!)
1 male knifed to death by scarecrows, decimated by grenade
4 scarecrow folks decimated by grenade
1 male mauled by a merman
1 female eaten by a kraken
1 male gets a garden trowel to the gut
1 female gets a hatchet to the head
1 male and 1 female crushed by falling debris
total: 68+