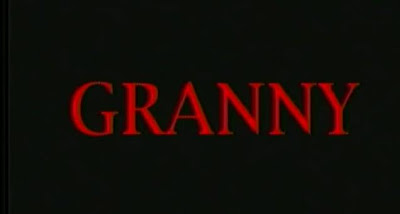 Surely, we all have our curiosities when it comes to bizarre slasher entries that's rarely heard or talked about. Mine was this short running yet painfully testy teen slasher.

Granny is a simple tale of eight college students who just wanna hang out one night. Alone. With no care in the world. In a house in the middle of a secluded forest. (And as we all know, houses in a forest are definitely safe.)

But after a serious (boring) talk concerning phobias, they suddenly heard crying coming from the basement. One of them volunteers to check alone (cuz it's safer that way, right?), only to find a maniac in a hag's mask and biddy clothes, waiting for him with an axe to grind. Literally.

Granny got out and starts killing the teens who just happen to keep doing the dumbest shit anyone of this genre would do, thus starts a night of cliched slasher trappings, low-budget gore effects, and an uninspired ending to tie it all close. For a movie of measly 58 minutes, it sure felt longer!

I maybe saying this cuz I have my expectations so high but its definitely a feat to make something so short feel so tedious. In fact, for a post-Scream slasher, it practiced more of the cliches rather than knowing and avoiding them, something that I fail to see would improve the movie's already weak scripting and plot, more to point out was the film's painfully low logic from beginning to end.

Now any slasher fans know that logic isn't this genre's strongest point but a little could had graced Granny. You just had to split up when everybody is dying, right? Or go and kiss your boyfriend for some minutes, knowing a killer is out there filleting your friends? WHAT'S WRONG WITH YOU?!

I can see only cheese lovers would get a fix out of this as no matter how bad Granny is, it does win at the factor of being a cheesy flick. The killer Granny also wins some points on how creepy she/he/ it looked, and then there's the nostalgic 80s vibe of the film, with a score that screams synthesizers to murder set-pieces that, like I said, defies reason but nevertheless entertaining.

I couldn't bring myself to say this film is a definite win; short running time and a cool killer should had gotten this film an easy cake walk but for some reason, it soiled itself of every possible opportunity of improvement. Or maybe it doesn't have to; cult followings sure proves this film's minimal worth but of those in search of anything better, don't bother. Cheesy slasher purists only.

Bodycount:
1 male hacked on the head with axe
1 female stabbed to death with carving knife
1 male clubbed to death
1 female had her neck broken
1 male knitting needle to the eyes
1 female asphyxiated in a plastic bag
1 male killed offscreen
1 female suffers a heart attack
total: 8
Posted by Kaijinu at 11:38 PM