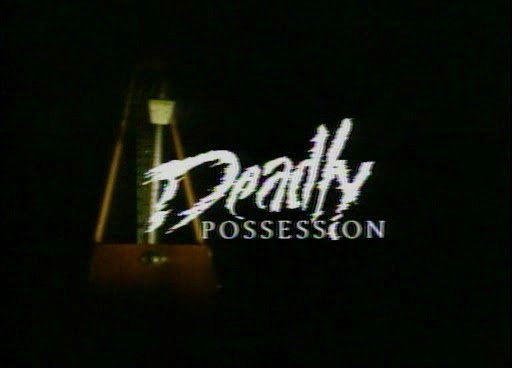 (Wow, took me seven long years to finally see this. The joys of movie hunting!)

Some parts Halloween (1978) with the amateur snooping of Nancy Drew and a bit of Hitchcockian thrills for good measure, this Made-For-TV Australian thriller succeeds at a lot of things that most of its gorier theatrical or video counterparts normally fail in: direction, style, and quality.

When a student from a nearby music academy gets attacked in her apartment and left for dead, a man seen skulking around tries to help her only to be mistaken as the culprit, sparking a brief chase before evading capture. As responding cops swarm the place and manage to drive the girl to a nearby hospital, one Kate, neighbor of the attacked victim, finds herself tangled in the crime when she's brought in for questioning and she recognizes a police sketch of the suspect as her former-husband, Mike.

Mike, of course, claims he is innocence after Kate finds him hiding in her apartment. Hoping to clear his own name, he leaves to go to the same hospital the girl is taken to, but finds himself under further blame when someone beats him to it, kills the girl, and lead him to the open arms of the police. Believing that the cops got the wrong man, Kate curiously looks into the case and soon finds herself the next target of the attacker.

Perhaps I should start off with the only flaw of the movie, which would be fair since the rest of Coda is undeniably great; the film is grounded for realism and devoid of any kind of hamminess, hence it should work pretty well as a thrilling mystery. Sadly, with so little cast to focus on, limited red herrings that aren't that strong, and the clues being too obvious, the whodunit elements didn't do that well.

Thankfully, the direction had us looking into the characters with enough dimensions, fairly paced to give us enough time to both know our might-be victims/suspect and build a brooding sense of suspense which soon escalates into familiar territories. Interesting to note is the fact that the main casts are mostly women, all of whom are portrayed to be more than cattle for the slaughter, which may have something to do with the cast having a reasonable amount of control over their roles.

With the main focus being on the plot and its characters, those who are looking for a heavy killcount would be disappointed though I personally didn't mind this since the story was compelling enough to entertain me and the performances of its casts didn't require the distraction of exploitable murders. In addition, the final third of the film features one of the best cat-and-mouse antics I've seen since the hallway axe murder of Prom Night (1980), involving our lead and villain going through darkened halls and claustrophobic libraries at closed university.

The art and music theme of the story also found its way into production, making great use of classical music to set the mood and enhance situations, as well as some well executed camera and visual work that's honestly simple but fits well nevertheless. A fine example of this would be that one sword murder where we see our killer seemingly hovers down a shadowed hallway, motionless and silent until it raises a sword and goes for the kill; it's a genuinely creepy scene and one that is visually impressive and caters well for slasher fans alike.

There isn't much else to say about Coda; it's a beautiful fun film to watch that didn't resort to nudity, gore, and cheese, something that is a lot to say comparing to most slasher films being released in the late 80s. A must see/own for those who love a simple slasher movie!

Bodycount:
1 female thrown through a window, later had her life support turned off
1 female slashed to death with a sword
1 male found frozen in a freezer
1 male killed offcamera
1 female drowned
Total: 5
Posted by Kaijinu at 2:47 PM