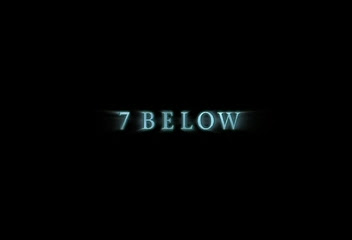 Yeah, why is does every slasher movie I see with Val Kilmer in it have him dead after a few scenes? I mean in Mindhunters, he had a couple of scenes as a FBI head and next thing you know, he's a friggin' meat puppet with hooks pierced into his face. Now, this? I almost feel sorry for the guy.

Anywho, here comes another dreck of a flick that I wish they put some thought first before they even started filming. First, the plot: some time in the 50s, a family is in tarnish as daddy's caught cheating, mum's depressed, granma's old, kids are...well, should have been fine, save one. Like ole Halloween night in Haddonfield, a boy snaps for some reason and kills his family with a hunting knife. No one lived. The End. Now, on with the second part! 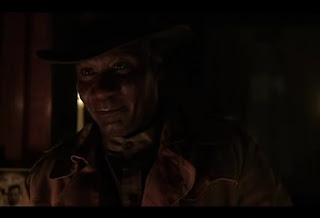 Fast forward today, a groups of five tourists and their van driver crashes off the road after avoiding a lady on the road. Of course, they're stuck now in the woods with their driver dead but look-ho! A Samaritan! Good! He tells you there's no cellphone signal! Not good! He invites you to a creepy old house where he lives alone by himself, which also happens to be the same place the opening massacre happened! Definitely not cool! But they didn't know that, so let's cut them some slack.

So where do we go from here? Samaritan starts to act all weird and creepy. Unsettling vibes around the house. One of them dies mysteriously. Oh yeah, there's something not right here. What's more is that there's also a storm brewing outside, keeping the tourists in but they trying to keep their cool. That is, until another one of them is dead.

Should have been a fair run, but Seven Below has this awful atmosphere that just doesn't work. The mystery aspect of it is hardly engaging at all thanks to some pretty lame scripting and direction. I can't really decide if the guys who planned this flick wanted a thriller, a ghost flick or a slasher. Oh wait, I didn't mentioned before about the ghosts? Well, let see here, there's this attempt to do the "you can't fight fate" idea, by having their supposed host bringing them in because fate calls for it and history has to repeat itself. Kinda did, but yeah, so what? What's in it for me? To be entertained? Dudes, believe me in this one, but it was hardly entertaning!

The movie's confused of its own plot and they did very little to fix that. Heck, all I know is all of them is a reincarnation of the murdered family and, if I get this right, one of them is the reincarnation of the killer kid in the opening. Okay, fair enough, but why on Earth did the kid gone crazy in the first place? Explain that! No? There you go.

Okay, let see if there's anything I can say good about this film...I'm gonna try here...alright...here it comes...

Kills? Lame and repetitive. Score? Doesn't fit at all. Acting? Why is Val Kilmer associated with these no-names? In a B-Flick? Camera Effects? CG at it's worse. Sense? Not one.

Long story short, lame-a-thon. Avoid like a fat kid with his mouth open, staring at you while you eat a bag of chips.