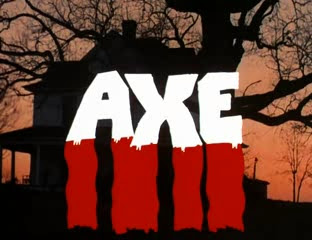 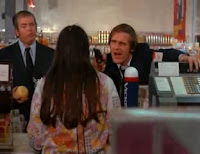 Slow in pace, no sign of plot, light on gore despite labeled as a "Nasty", California Axe Massacre, or Axe in some box titles, had brought the likes of Craven's infamous Last House on the Left (1972) to Southern fried proportions minus the infamy. 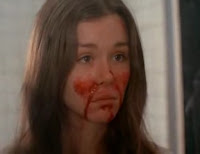 The story starts with three killers waiting in a room owned by an associate that had done them wrong; when he came back with a gay lover, the hoodlums starts beaten the tar out of him, killing him and his lover running through a window and falling to his death. Yes, you heard me. One kill and one man slaughter. Now on the run, the trio head country, where they tortured a store clerk by throwing fruits above her head and shooting them with a live gun. As far as I'm interested to see torture, or not, this is hardly rocking my attention and is boring me to death. Technically, what I'm saying here is that it ain't that evil enough for me. Eitherways, they left before anymore damage can be done, and seek refuge in a house owned by a quite daughter and her paralyzed grandaddy. Of course, seeing this can be considered as a Last House on the Left clone, the girl ain't that all helpless and she has a mean hatchet to whack back at. 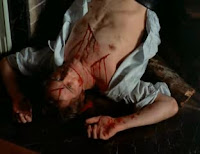 Alright, with a running time of an hour and five minutes, I was expecting an all through gorefest and stalk antics, seeing that this is labeled as a "slasher" and is in the Video Nasty list, but what I had instead was a cheap run of exploitative nonsense that hardly make up for its supposed infamy. Yes there's rape, but it's barely graphic, more like watching a middle-aged guy wiggle around on top of a nearly expressionless gal, who mind you is also reaching for a weapon to kill her rapist. Other than that, there's barely any gore in it, and the title didn't match-up to my expectations of an axe massacre while we're at it. Then again, how can you have a massacre with only three victims? And one of them didn't even die at the hands of our psychobitch! So I don't really get all the infamy about this, was the version I saw cut? Was there supposed to be more gore in it? I just checked IMDB and I think I got everything right. This is nasty enough to be banned? Who the hell gets offended by this worthless-oh wait, I am, right now. Well, yeah, I am pissed. For different reasons.

Yeah, without a doubt, I'm pissed, and agreeing with the ban, for an entirely different reason. If you still want to check this one out, be my guest...

Bodycount:
1 male beaten to death
1 male crashes through window and falls to his death
1 male back of neck sliced with razor
1 male hacked to death with axe
1 male shot on the head
total: 5
Posted by Kaijinu at 3:11 PM