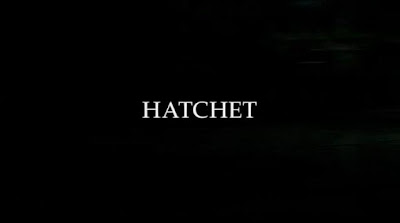 Time to say hello to the overly familiar and recognized cult hit classic of the 2000s; A messy offering to the 80s stalk-and-slash done in tribute of Friday the 13th with gore. Lots of gore. 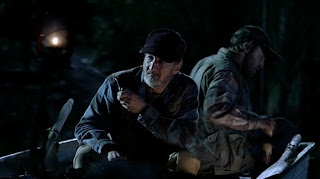 Opening with an awkward father-and-son gator hunter pair who gets a terrible turn with a human body-disassembling hulk before shifting to a lively and sexually active Mardi Gras party with boobs, booze and beads filling every corner of the street, in comes in our reluctant hero, Ben, whose recent break-up have him dragging his heels around New Orleans, ignoring the festivities and queering up his crew of college frat mates, including token Black guy Marcus. However, he decided to be more culturally active in another way, via haunted swamp tour. Yay?

At the tour, which a reluctant proprietor (Tony Todd no less) willingly cut off his ties with due to a bad experience with a couple of tourists prior hand, right-hand man Shawn corrals Ben and Marcus into the  group which includes a porn producer and his two female "stars", a middle-aged overweight couple, and a local, whose mysterious and distant personality clearly marked her suspicious. Sometime in the middle of the murky run, we all get educated with the story of Victor Crowley, a uber-deformed boy who had only known the love of a father who tried his best to hide his son away from the judging world. Sadly, it ain't that hidden well as one Halloween night, while his father's away, a group of pranksters accidentally sets Victor's house on fire. When his father returns, he reaches for a hatchet to break into the house and save his son but, in a panicked streak, Victor had his face pressed against the door, killing him instantly when his father's hatchet split his face in half by accident. His father died soon out of heartbreak and so starts the legend of the vengeful ghost of Victor Crowley. 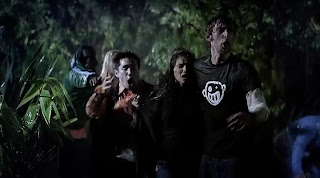 Not too soon, this unfortunate group would find themselves away from civilization and trapped in the swamps when, in dumb luck, their boat beached against some rocks. In addition to that, one of them got bitten on the leg by a croc and, worse, they all ended up nearby the Crowley House (or at least what remained of it) where, so to speak, resides the fleshy ghost of none other than Victor Crowley himself, bulked up and effing angry, ready to tear them down to twos, threes, quarters. Literally to pieces.

If there's one thing we slasher fans can agree with, it's the 80s; those days of forbidden fruit partaking, slipping into drive-ins or grindhouses or even yer local movie houses as a little tyke, or hanging out with yer girlfriend in hopes her frightened screams would be followed by her arms wrapping around you. A lot of our slashers these days have their gimmick but it's best to remember the good years that started the full run of the slasher circle and with movies like Blood Night: Legend of Mary Hatchet (2009), Dark Ride (2006), Last Caress (2011), The Tripper (2006) and even the sleeper hit, The Sleeper (2012) (*rimshot*), young fans of the 80s grue are doing their best to keep the nostalgic feeling felt. 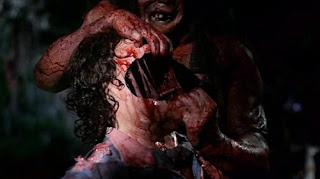 Hatchet, for one, harks back to the late 80s entries where plot is thin and gore is important. Only here, thanks to our little improvement in modern practical effects and open acceptance to poking fun at the subgenre's trappings, gore is good and the story is a silly romp that's made for pure enjoyment. With limbs torn off, bodies chopped in half, and jaws shredded to bits, the film's blood work broke all limits and delivers some of the sickest kills ever to be laid eyes upon. Committing these acts against the human form is our new age boogeyman, Victor Crowley, whose deformity-based origin rings a bell or two to our beloved Jason Voorhees as well as his hulked up backwoods hick character. In fact, if you're an avid fan of the F13th series, you'll see a lot of inspiration drawn from our Hockey masked killer and his films. (And they, in return, felt honored to be an inspiration, based on the 2009 documentary His Name was Jason.) 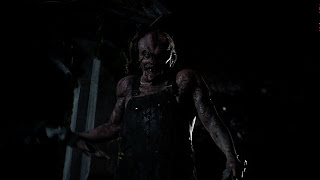 Ringing true to it's 80s inspiration, Hatchet walked through rounds and rounds of the cliches the genre is known for, which may or may not be a hot idea for many people, nevertheless worked fine if the audience are booking up for the throwback horror of the year. Sadly, among its attempts to spark the flare back to its granddaddies, it can't help but be guilty of the flaws. As one might expect, the comedic nature of the film rely heavily on script and with that, some of the jokes just fell flat like pancakes. Some works, but the cheesiness has its levels and in the end it, will all be up to the peeps who're gonna watch this film.

Still, as a Friday Night flick, you can't go wrong with realistic latex gore and blood that run like rivers, packed in a slasher flick who knows its genre well. Hatchet may not be everybody's piece of pie, but for those who loves their gore and their slasher, ought to give this film a try and a chance. Who knows? Maybe with all the hype going on with it, you might end up hitching along to the ole' Crowley Place, and had yourself holding to all yer pieces!

Bodycount:
1 male found in half
1 male dismembered to bits, torn in half
1 boy had his face split open with hatchet by accident (flashback)
1 male hacked in half with hatchet
1 female had her head pulled apart by the jaws
1 male had his head twisted off
1 male decapitated with a spade
1 female had her face shredded with belt-sander, impaled to a shovel's handle
1 female dismembered offcamera
1 male had his arms ripped off, slammed to a tombstone
Total: 9
Posted by Kaijinu at 4:39 PM