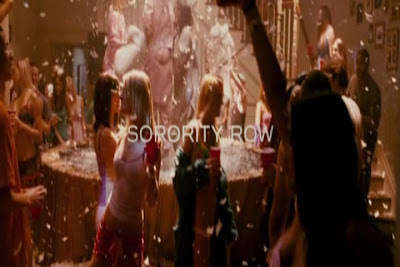 Now, let see here: a hooded killer stalks teen girls a year or so after a bad prank killed one of their friends. Huh, doesn't sound pretty groundbreaking to me. In fact, if I have a dollar for every film I know that did this plot, I'll be... well, I probably have $36 in cash...plus a few pennies...

As much as I could tell, Sorority Row is a "remake" of one of the more recognized cult slashers out there, 1983's House on Sorority Row but, pretty much like any known modern slasher "remakes" out there, it's very loose from the source material and is probably more on the verge of being a movie of its own. And you guys can probably tell that, being a remake of a cult fave, this sparked some disputes with the original's fans as well as those who are getting tired of the cliches from both remakes and teen horrors, hence this film's mixed acceptance in today's horror society. But can this film at least be worth a watch? Let's see:

Getting back on a cheating boyfriend named Garrett, the girls of Theta Pi pull a prank on him with sorority sister Megan faking her own death while in the midst of their make-out session. Still in the light of the prank, the sorority sisters and Garrett takes her to an abandoned steel mill, intent on "dumping" her body in the lake with one of them jokingly mentioning that the body will float due to some air in the lungs. Taking the prank for real, the confused boyfriend grabs a tire iron and punctures Megan's chest, killing her for real. Now guilty of association with an accidental man slaughter, the group decides to dump the body into the mines, along with the tire iron, and vows to never speak of the crime again.

A few months later, most of the girls are back on their feet. Unfortunately, the events from that fateful night start to catch up on them while they plan their graduation party as each sister receives a picture message of someone in their graduation robe holding a bloody tire iron. Though they try dismissing it as a (bad) prank, the girls find themselves stalked by a hooded figure with a "pimped" tire iron-turned-bladed weapon; one by one, they, along with anybody that gets in the way, gets killed off with a cryptic message for all them: Theta Pi must Die!

In a nutshell, it's I Know What You Did Last Summer done on campus with very little similarities with its 1983 grand daddy, save some "hints" such as the "Sea pig" line, the shower stall kill, the basement stalking and, of course, the trusted cane of doom from the original in a cameo. Other than that, it's a mindset of entirely alternate proportions as everything in it is more aimed for the MTV generation with its self-awareness and the good old fashioned pop culture references, which, as overused as it is, comes pretty witty in this flick for me.

I'm actually pretty entertained by this one; no teen drama to ruin anything, the dialogue between each characters is really engaging and the mystery around the killer's identity is good. Couple that with really inventive kills and murder weapon, and let's not forget my first fave "bitch" ever, Leah Pipes as Jessica, whose continuous side comments were more funny than annoying, and this is one fun flick!

Now, comparing this with drecks like (choke*) the 2008 Prom Night remake and (chokes even more*) the 2008 April Fools Day remake, I have to draw the friggin line on the sand here as this is titanium compared to those messes! (How can you mess up Prom Night is beyond my understanding. I mean really, stalk-chase-kill. How hard is that?) It could be from the fact that the film is an entire opposite of the first, whereas the original Sorority Row experimented on direction, pacing and atmosphere and succeeding on it, Sorority Row '09 went for a more slick and party house-feel atmosphere, while still keeping the pacing, direction, and bloodier kills thanks to a creatively pimped tire iron with a hunting knife, a harpoon, a head spade and a spearhead for heads. (I never seen any weapon like that since Freddy's ginsu gloves. Kudos!)

Now, as for the cons, I can't cover up the fact that it's a teen horror and that it's guilty of the shortcomings commonly found in such flicks. While the mystery on the identity of the killer was really engaging around the first half, by the time the reveals start to draw their way, I just can't help but tilt my head like a confused puppy to where the heck did these reveals even came from? Its a tad too convenient, even with their own merits in an attempt to tie-in each murder with the reveal, but uh, yeah, how exactly does the killer pull it all off? Of course, there's the fact that it holds no torch near the cult fave and it fails to bring the same dread and stylish photography House 83' have, but it does deserve, nevertheless, some credits for at least not boring us like what the two aforementioned disasters did. (You know who. Bringing shame to cult classics, shame on them! I piss!)

Completely misunderstood and ultimately underrated, Sorority Row is the diamond in the rough among this generation's loads of overdone remakes, or "re-imaginings", one kind of flick that you should definitely give a try and best remembered as not a tie-in to something far, far greater. The original is gold, while this is silver, two separate titles on their own footings. Nuf said.