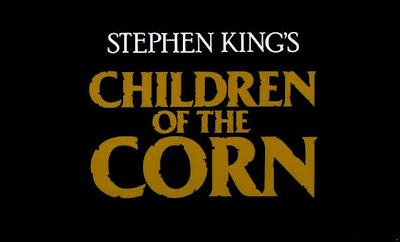 If you had read my buddy's Blogger of the Month's post, you know that God (or at least one of my gods) wears glasses, has a nasally sounding voice and has a heart of a small kid...sitting on his desk. In case you don't get it, I'm a big Stephen King Fan and probably own most of his books save the The Dark Tower volumes. I started reading him since I was in grade school and still follows him until today.

Now, more than a while, I know King don't do slasher stories but apparently a lot of directors, including Zombie maestro George A. Romero with his film adaptation of King's "The Dark Half", refuse to accept that and had adapted some of his books and shorts into multitudes of slash and dice antics, but none of them had gone through the same popularity and recognition as the crop known as Children of the Corn.

While not entirely the first of it's kind, Children of the Corn struck gold when it combines taboos of killer children and religious zealotry; opening with one Sunday morning in Gatlin, Nebraska, a group of church goers went to a malt shop only to be ambushed by the diner's young patrons and staffs, apparently under the influence of a mysterious child preacher known as Isaac and his second in command, Malachi. Soon, the rest of the townsfolk over the age of 18 were killed off, as well as any passing adults who entered their haven.


Some years alter, Burt (Peter Horton) and his girlfriend Vicky (Linda Hamilton) drove cross-country through Nebraska to his new job as a physician in Seattle. Along the way, they hit a wounded boy who appears to be attacked beforehand. Out of panic, they drove deeper into the town of Gaitlin to find some help, only to finds themselves unable to escape the town and prowled by the young and murderous cultists as well as a demonic deity only known as "He Who Walks Behind The Rows".

With films such as The Horrible House on The Hill and Bloody Birthday, Children of the Corn is one of the many additional killer kid slashers made during the golden age of its kin, though in here, while the slasher cliches are present, the bigger impact on what made Children of the Corn a cult success was its religious theme.

Perhaps more religious than the Stephen King short, the movie tackled paganism and cultism, as well as a symbolic look into the nature of fundamentalism and influence, as it twists the idea by providing young cult members, showing how easy it is to control a weak (or weaker) will and how one small idea can lead to disastrous results. Though supernatural elements were used to back up the statement through a cheaply portrayed yet thematically intimidating pagan deity, there's no denying the intangible nature of the thought, which makes this film such an interesting watch since it's both pro and against the idea of religion, sticking with the universal truth that good prevails evil. ( Any religion without love and compassion is false! It's a lie! A powerful line. Struck a few heartstrings for me. Though Evil never dies. Proven by this film's eight sequels, and counting...)

Adult roles were minimal and, frankly, very average in your standard horror movie manner; though they're chummier to each other compared to King's short, Horton and Hamilton's characters soon fell to a more standard alpha male and damsel in distress characters commonly found in monster flicks.The child casting in Children of the Corn had its sights on John Franklin as the squeaky-voiced child preacher from hell and his warmongering lieutenant, Malachai, courtesy of Courtney Gains who don his role with much sick sense of slaughter and blood lust. Including to the change from the original prose was the inclusion of two tykes, Job and Sarah, who were there to side with our heroes through their time of need, acting as their insight to the cult's doings. Playing them were Robby Kiger and Anne Marie McEvoy, with much adorableness and amateurish child acting to go along a script made for their character to serve as a hopeful and more good-natured part of the film. The rest are either random kids with scythes and sickles, though their monstrous number does make them intimidating around a vicinity that's hardly populated. (And with decent camera work, too.)

The slasher emphasis in this film were also an odd cone compared to the rest of any titles coming out from its year. Majority of the slashers coming from this part of the 80s, solely focusing on bodycount and cheese, Children of the Corn however focuses on the creep factor, wondrously backed-up with an Omen-esque soundtrack sang by kids and numerous stalking scenes taking place in a very isolated looking town. Most of the kills came from the notorious opening scene, wherein the rest follows are either done offscreen or quickly.

Though Children of the Corn transformed itself from stalk and slash with killer kids to a supernaturally fueled religious horror in the near end, it's no short of the slash stuff rawness neither; not exactly the finest among the Stephen King adaptations as well, but quite a memorable cult title to say the least.

(Note (and spoiler): Though it appears Eli was blown apart by the demon He Who Walks Behind The Rows, it turns out that, in a sequel, Eli was put to a coma rather than killed in that incident.)
Posted by Kaijinu at 1:49 AM