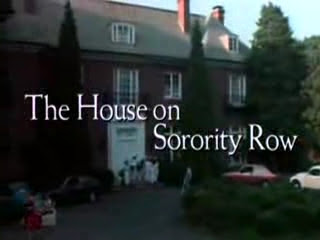 In a dark, stormy and blue tinted night, a woman gives birth to a baby. The doctor and his nurse makes the delivery in the woman's own home, but when the baby came out, something's wrong. The mother asks if everything is alright, but her doctor can only shake his head.

Moving forward to the present, the seniors of a college sorority are planning to throw a big graduation party for themselves, but their house mother (and soon revealed to be the ill-fated mother of the opening act) Dorothy Slater doesn't approve any of that. Whether she's bitter from that night or that she's naturally like this, her stern and strict sense of order have some girls hating her, and hate her even more when old Slater disrupts a tryst in progress, humiliating one them. (And destroying a good water bed!) To get back on her, the gals plot a cruel prank involving a fake gun, which ended drastically when they find out that the gun wasn't all fake. And it was loaded!

After clumsily disposing the body into a very dirty pool, the girls try their best to hold their party as if nothing happened, avoiding speculation. But when Slater's body suddenly disappears, the girls soon find themselves stalked by someone donning the soaked robes of the their late house mother, picking them (and some random college guy) off with the sharpened head of old Mrs. Slater's cane.

What House on Sorority Row lacked in originality makes up with, well, everything else. With the paper thin plot, the film runs on a smooth thread of script, direction and tension, as well as some good kills to keep any fans of the genre happy and satisfied.

The film's pacing is what actually got me liking this film the first time I saw it; it has this kind of momentum that I rarely see in a slasher flick; not too slow and not too quick, yet each scenes fits and fluidly moves from one point to another, whether it contains a kill, a scare, or a red herring. The film is rarely boring, giving much needed tension that's often resembles more of gothic thriller than that found in slashers, such as creepy basement and attic scenes, and one sequence involving some frat boys dipping into the dirty pool, which may or may no longer contain a body. These scenes are surreal and creepy, with figures skulking around in the shadows and red herring toys left to be found, thanks to the film's lavishing cinematography and photography, hailing a Mario Bava-inspired colored lighting to give off a macabre nature.

The acting isn't anything I would call worthy of any higher recognition, but they're not overly hammy and is actually solid despite a few occasional over acting. Lois Kelso Hunt plays Dorothy Slater, the sorority's stubborn and aging house mother who seems to be lifting a few burdens of her own, resulting to her rather manic and even sympathetic plight. The sorority gals all have their moments, the most from Kate McNeil as the obvious final girl Katherine and Eileen Davidson as the bitchy Vicki, who's the one responsible for setting the movie in motion. The rest are your typical girls in a group, mostly there to be a part and lend support to the main two sisters, and unlike most of the teenagers seen and will get killed off in a movie of this ilk, they're more natural looking and more likely to be convincing.

Now, when it comes to kills, I have to say, I never thought a walking cane would do so much damage. The kills are nothing in comparison with the likes of bright red splashes from other dorm slashers such as The Dorm that Dripped Blood, but its more around the standards of Final Exam. Also, let's not forget the score that clearly knows its place; rather than a loud and wild tune, the score settles on a more haunting yet beautifully upbeat tone, popping up all in the right moments, making one of the most recognizable slasher themes composed. (At least for me it is)

A Genuine cult classic, House on Sorority Row is a film best remembered for it's stylish simplicity. A slasher fair to burn through with a tad left of center, breaking a few tropes that is deemed necessary for some something quite new and old at the same time. If you hadn't seen this gem yet, maybe it's about time you do. Just remember, never pick up any toys along the way, especially that jack in the box...