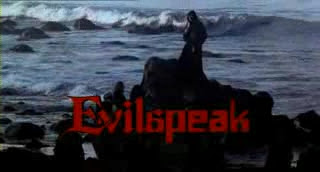 Revenge can be sweet and deadly, but sometimes it can be outrageous. For slasher fans, revenge is a staple hold for most movies of that sub-genre but none of them reached the outlandish stakes as devil worship and embraced new age technology as Evilspeak. Well, none back in the 80s at least...

Opening in the Dark Ages, we see Satanic priest Father Esteban (Richard Moll) and his followers get banished to the shores of Spain for going against God. Unfazed, Esteban continues his Satanist ways, holding blood rituals and treating us with this film's first kill as he hacks away a willing sacrifice's head with a sword.

Jumping forward to the present, we now follow Stanley Coopersmith (Clint Howard), an orphan in his teen years enrolled at West Andover Military Academy, whose inept social and athletic skills made him an easy target of bullying from not only his fellow cadets, but most of his instructors who sees nothing worthwhile in him. When tasked to clean out the basement of the school's church one day, he finds the forgotten tomb of Father Esteban, which contains his diary and a tome filled with Satanic rituals. Translating the books using his computer skills, Stanley learns of Esteban's Satanic past, and too detailed instructions on how to initiate a Black Mass.

As the bullies continue to make life a living hell for him, Stanley grows desperate on dabbling into dark powers to get even, unaware that another tragedy will soon fall on him and hell, literally, will break loose.

Seen by most as a genderbent take on Stephen King's Carrie only with Satanism and some early 80s computer tech thrown in, Evilspeak (1981) is a rather bleak and intriguingly straight revenge tale that slow burns its way through various misadventures littered with terrible people as a mean to create a focused sympathy for our protagonist, as well as a couple of worthwhile kills chucked in to pass the time. It is an approach that definitely isn't for everyone, especially coming from the fact that its silly concepts of Satanic computers are played with as little cheese and humor as possible thus the pacing and tone would be a challenge to sit through for some, but for those who are patient and open can get something of entertaining value at the climax, particularly of the violent kind.

The last third of the film is where the juicy parts rear their ugly yet welcome head as the film lets go of all sense of realism to bring us chaos at the hands of a floating Clint Howard, a burning church and a horde of demonic boars. It's a stalk-and-slash last act like no other, made more memorable with the amount of chunky gore and visual effects used, including a memorable kill involving a pulsating crucifix with a very lethal nail and a head getting cleaved down with so much force, its practically destroyed.  It also helps that the synth music here, scored by Roger Kellaway, channels The Omen (1976) only with a more manic nature and praising crescendo, elevating the mood up to its hellish end.

All in all, Evilspeak (1981) may not be everybody's go-to slow burn revenge supernatural slasher everyone would remember fondly, but it is an underrated gem for some who can appreciate its uniqueness and oddity of a direction. Rent it if you like, but for fans of cheese and no holds barred supernatural revenge, this could be a keeper!