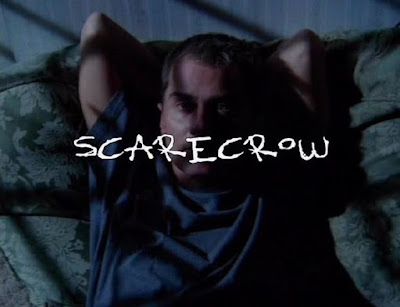 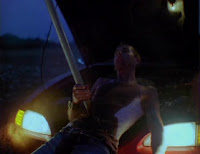 Fun fact: heard of this film since 2010, only get to see it in 2015. Before that, I was made aware of Scarecrow's reputation to be a so-bad-its-good film and that gave me some high hopes seeing I did enjoy some utter garbage like Nailgun Massacre (1986) and The Redeemer: Son of Satan (1978). Unfortunately, upon actually seeing it, I have a lot of questions in mind: How, when, where, why and/or what exactly made this so bad it's effing good?! Cuz I saw more of the bad and nothing else. 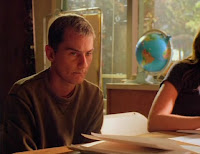 The story of Scarecrow focuses on a typical lonely dork named Lester who is pretty much the school's punching bag as bullies and teachers pick on him for being a poor white trash wimp. So when the sheriff's daughter (played by Tifanny Shepis) befriends him out of pity, Lester couldn't be happier until he is emotionally crushed when he saw her drunkenly kiss another guy at a party. 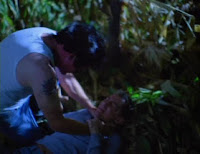 Distraught, Lester unleashes his frustrations at some random drunk his mother was boning that night. Drunkee, of course, didn't like that so he chases Lester into the fields and strangles him to death. Some time after the incident, the dork becomes one with the scarecrow that happens to be next to him when he died, giving him amazing acrobatic skills, immortality, and a bad case of groan-worthy one-liners. 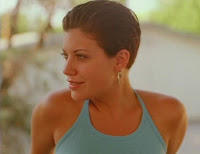 Now, I am going to leave the editing and most of the technical concerns out of my criticisms as this film was shot within 8 days with a budget of $250,000. I guess the main problem I have with Scarecrow is how badly it delivers; the story seems to be building up to "something" by letting a good bulk of the movie's first act focus on our lead being troubled but the effectiveness of this approach is countered by the inability of its casts to emote. This is sad as I can tell these scenes were meant to be serious, but seeing they hired a bunch of 30 somethings to act as teenagers, I'm not overly surprised that the final product has a tone that is completely off the wall and utterly confused. 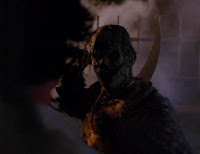 This went on until it finally shifts into a slasher, with the meek bullied boy transformed into a supernaturally possessed scarecrow that, for some odd reason, suddenly gains the ability to do somersaults but fails to kill all those who bullied him. He is pretty much a cheesy caricature of your classic late 80s slasher villains, one-liner spewing and impervious to nearly all forms of damage. He could have been a cool movie monster if only his lines weren't so ear-splitting terrible and his kills were more impressive. Whenever he appears, there's no build-up or any kind of transition. He simply pops up, do a back-flip or two, say a few cheesy lines, kill the victims and disappears. All of that in routine and it's hardly funny, scary, or any form of entertaining for all honesty. 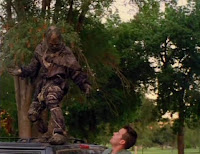 Perhaps Scarecrow is simply not for me; it's a matter of personal preferences and this film somehow didn't meet mine despite doing all the silly things a trashy slasher like Leprechaun (1993) or Truth or Dare: A Critical Madness would do. And yet many horror fans out there like this film for being so horribly made, like a slasher version of The Room (2003). With that said, I think I'll let the rest of the world do what they want with this movie and I'll just enjoy Scarecrows (1988) or Night of the Scarecrow (1995) instead. Until then, you're tearing me apart, Scarecrow!

Bodycount:
1 male ran through with a pipe (story)
1 male beaten with a bat (dream)
1 male strangled to death
1 male decapitated with a scythe
1 male ran through with a pitchfork
2 males hacked on the head with scythes
1 male stabbed on the head with a corn cob
1 female impaled through the head with a baton
1 male brained to death with a frying pan
1 male shoved to a grill, killed
1 male had his heart punched out
1 male hacked on the neck with a shovel
1 male gets a scythe through the chest
1 male pinned to a tree with a spike
2 males killed with a scythe
Total: 17
Posted by Kaijinu at 11:08 AM