I Rolled a Seven on Cheese: Skullduggery (1983) 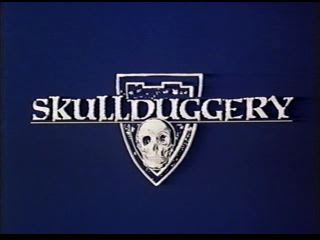 The closest thing I've done to a role playing game is the massive multiplayer online RPG Ragnarok Online which I obsessed over when I was at grade school, played moderately at high school, and rarely at college until horror movies finally flushed it out of my system. (Which is good as keeping my game account alive was costing me money (and time) way more than other hobbies. Still, I do miss my level 72 gunslinger) 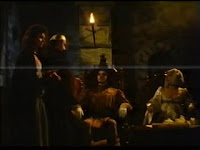 This said, I may not be as acquainted with table top role playing games but I am familiar with the concept; I know games like Dungeons and Dragons have been popular since the early 80s and I am aware of the public backlash against role playing games in which religious nuts accuse the games of promoting Satanism and other forms of occult activities among young people. This idea does sound like a solid plot for a horror movie and Skullduggery is a living proof of this attempt, albeit not a very good one. 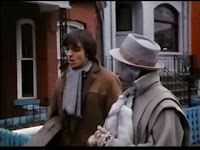 Opening around the 1300s, a warlock and his cohort decided to unleash vengeance upon their king as it appears their highness forgot his end of the deal when the warlock guaranteed the king's power over the land. After poisoning the king with a tainted apple and stabbing him with a hairpin (!), the warlock then hexes his bloodline and each of his descendants will be servants of the devil. 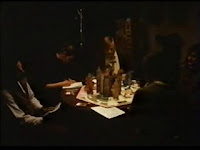 Fast forward to a couple of generations later, we now focus our attention to Adam, a young man who works at a local costume store and enjoys playing a fantasy table top game with his peers. Unfortunately for him, he is starting to notice strange things like odd lights coming from the game's cardboard puzzle, visions of random spells actually working, and even encountering a magician who can make booze and nuts appear out of nowhere during a local talent show. (If Adam made a big deal out of the latter, I'm counting it as "strange".)

The further Adam experience these occurrences, the further he realizes his destiny as one of Satan's damned and goes on a killing spree, often blurring his reality with that of his fantasy game and keeping in character as an evil warlock. 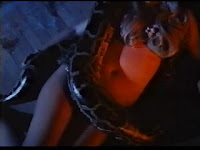 For a movie that was supposed to cash in to the Dungeons and Dragons is Satanism scare, Skullduggery is a rather convoluted and unnecessarily cheesy stab with an interesting plot but outrageous execution. As mentioned, the idea of fantastical escapism juxtaposed to one's slow descent to madness would have called for a thought-provoking story and at some point, the movie seems to be aiming at this idea; the fantasy elements weren't that strong and many of them can be disregarded as nothing more than our killer's out-of-control imagination, a good example would be the scene where Adam witnesses an onstage death as a girl was crushed to death by a python during a play, only for the rest of the people to find her dead from a heart attack. 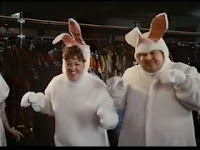 Unfortunately, the seriousness of this idea can be easily discarded since not only did the film started and ended with heavy implications of the supernatural (thus rendering the concept of  "imagination gone homicidal" useless) but the execution was all over the place, with chock-full of strange tidbits, plot holes, and bad acting even for a standard 80s B-flick. Its outrageous and inept-looking nature shows every now and then, to the point that the film appears unsure whether it wants to be a bad cheesy horror or an arthouse film of the laughable kind; why do every people in this movie seem to have a costume fetish, or how can a whole human body be reduced to a skull via steam are some of the oddities featured here and, for the sake of our own sanity, I dare not question any of it. 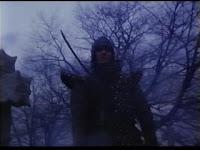 This being said, Skullduggery is a film of a selective taste; it does feature a number of great chase scenes and outrageous kills but how well they work as a movie depends on how good one can handle their cheese. With this film's feisty cauldron pot of fondue bubbling its cheddary nightmare everywhere, I believe only seasoned cheese fans, as well as those with a working brain who took 20 shots of Jack Daniels before seeing this can withstand its Gouda-induced banality. (It is that crazy!) A true example of a so-bad-its-good charm, complete with a warning label for those who are not ready to handle the ham-heavy horror that is Skullduggery!