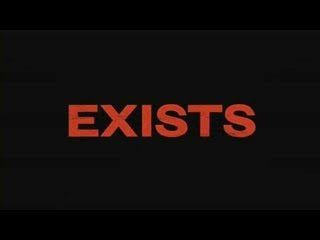 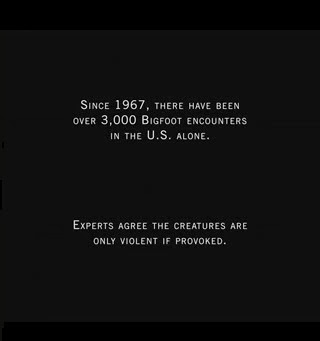 Ever since the 1980s gory cheesefest Night of the Demon proved to us that we can have legendary cryptid Bigfoot as a slasher villain, I took an interest in seeking out other possible Bigfoot slashers out there and, despite scarce, we did have a couple of solid attempts; the 1988 horror melting pot Demonwarp featured the big hairy guy as a heavy breathing massacring monster along with aliens and zombies, 2008's The Wildman of The Navidad took tribute to the beast in an atypical Southern style, and then there's the mean-spirited 2009 biker exploitation Dear God No! which had the monster dismembering evil bikers in an odd twist.

Joining in this rowdy little group is 2014's found footage horror Exists, which follows two brothers and their three friends visiting their uncle's remote cabin in the woods, which was off limits to just about anyone as the old coot believes Bigfoot constantly wanders around the site.

Scoffing this as crazy talk, the gang ventures to the cabin to have a good time, only to hit something rather huge while driving there one night. From that point on, weird shadows are seen moving around and angered wailing is heard nearby; true enough, whatever they hit is terribly pissed and its hunting these kids down one by one. 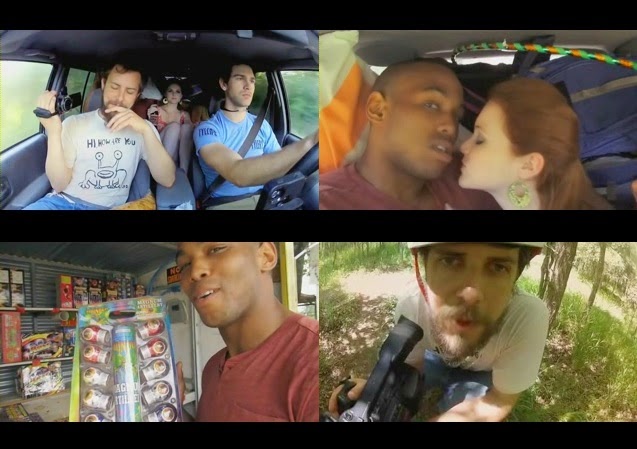 There isn't really anything new that can be said about Exists as it is another found footage horror that ticks off every cliche the sub-genre is known for, the biggest one being the question why exactly the guy with the camera is recording all of this. This fact have been a stable nitpick I came to wonder from these kind of movies and while some scenes did justify the need for the camera (like that one scene where they used the device's night vision option to see what's lurking in the dark), was there a need to record someone being choked to death or see how much the car is totaled? It kills off the believability of the situation as well as any sense of dread and shock that might benefit from an offscreen implication.

And yet, this is the only true flaw I can find from this movie as the rest is pretty okay for my taste; for one, we actually get to have a workable cast of characters that we can feel for. They're nothing overly developed but they are likable and somehow realistic at a level that you can tell they are real friends. None of them are that annoying or distracting, which makes the Bigfoot attacks all that scarier and intense.

And speaking of the creature, the fact that the entire film was shot as a found footage somehow gave the advantage of making Bigfoot more menacing; it's the famous Patterson-Gimlin footage only as a slasher with the hairy monster remarkably featuring a lot of humanoid characteristics, from sabotaging their only escape to throwing objects that once belonged to its victim at the group as a form of foretelling their fate. The creature here could easily pass as another slasher villain with a really reasonable killing spree (All I could say without giving up the surprise is that its really personal and distressing) and some mighty fine make-up effects.

The kills could had used more blood and gore, but the build-up and intensity from these scenes were viable enough to give the murders enough impact. I really dig this one scene where one of the kids hopped on a bike in an attempt to look for help, only to find himself stalked and chased by the creature. It's simply, incredibly tense, and the pay off showed the malicious side of a Bigfoot that none of these kids ever saw coming.

It's not perfect but it's far from bad, Exists is an easy film to sit through as its really no more than kids surviving attacks from an apparently very angry monster. It could have used some more gore and skin seeing how much of the build resembles our favorite hack and slash but I guess if they have little to work with or if it was approaching a certain style, we can't always get what we want from a movie. Still worth a look.