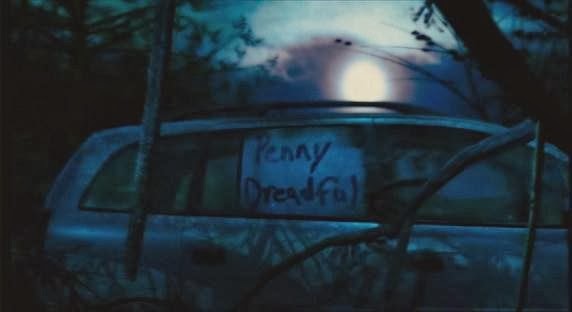 Penny Deerborn has amaxophobia, the fear of driving inside a car, ever since a childhood accident took the lives of her parents. Now grown-up, she is on a road trip to the mountains with her psychiatrist and friend Orianna, in an attempt to overcome her fear of automobiles. Things would have been good until they accidentally hit a hitchhiker in the middle of the night.

Luckily (or unluckily) for them, the hitcher survives the hit and appears relatively unscathed; feeling responsible, Orianna decided to help the hitcher out and let her ride with them, unknown to her and Penny that the person they are sharing the car with is a deranged murderer. After killing Orianna and wedging the car between trees, Penny finds herself trapped inside the very thing she fears, with a maniac outside physically and psychologically tormenting her as well as killing anyone that tries to get in the way. Could Penny stay sane and alive until day break, or will she succumb to the horrors surrounding her for the night?

Taking cues from Stephen King's Cujo, Penny Dreaful is a slasher movie of the unique kind as most of the action takes place inside and around a car, focusing on its lead character's turmoil in what could be her worst case scenario come true. This little character element made Penny's hysterics plausible to the point that it does make us feel for her, especially when we do see her break down as fears, both old and new, starts to engulf her, and seeing everyone going near the car gets killed off just further made this scenario hopeless.

A lot of this is due to  Penny's actor Rachel Miner (of the Sons of Anarchy TV series) doing a spectacular delivery as an automobile-phobic, a fear not so tackled as a subject among horror movies or other films in general. Unfortunately, the same cannot be said for most of the other casts as they are simply made to be slaughtered. This is where the movie's flaw draws in and it is that the plot can be a little predictable; once we are introduced to a new set of characters, there is a high expectation they will be killed but the flow has a tendency to slug around in high hope of building suspense.

There isn't much in terms of twists as Penny Dreadful's focus on character deterioration and survival are all there is to it. Still, for its worth, it is a solid entry and it never failed to entertain with some jarring build-up and surprises, even if our main lead can be a wreck and the supposed twist reveal in the end may not be workable for many. (Remember that "killer in the backseat" urban legend? This one has a nifty take on it.)

Creepy, intense, and genuinely claustrophobic, Penny Dreadful deserves a good audience among us slasher fans, particularly those with a thing for backwoods and hitchhiker horrors.