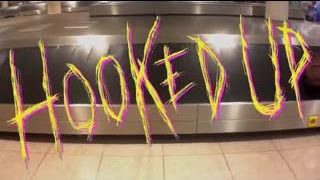 Lo and behold! The first full length horror movie to be filmed with an iPhone! What does that mean for us?

Friends Peter and Tonio decided to fly all the way to Barcelona for an international one night stand in an attempt to lighten up Peter's recent break up. At first, it was all fun and kinky games as they bar hop and flirt with girls in hopes of getting it on. They eventually got what they came for when a beautiful woman invited them to her house for an evening of pleasure, only to discover that she is a deranged killer and the house was somehow boarded shut, trapping them inside as they fight to survive or face a fate far worse than dying.

If there is anything this film made me realize is that horror films these days could really use some likable characters; producers need to realize that horror works best if the victims do not deserve the predicament that falls on them, thus making us feel afraid for them. Keeping this in mind, characters like Peter and Tonio pretty much ruined the majority of this movie for me as they are the kind of people you like to see die at very first minute they are introduced.

For a good dose of the first act, we see these two contrasts in personality and yet ultimately agreed to think with their dicks and do the most expensive one night stand planned; Tonio is this immature douchebag that was actually responsible for his friends break-up (and more at a reveal during the climax), while Peter, though slightly sympathetic at first, gradually devolves into this hate-filled psycho whose breakdown prolonged the film for an extra 18 minutes. While it is slightly fun seeing them get mentally and emotionally tormented to the point of whimpering and betrayal, it is not enough to cover the movie's flawed direction, frustrating execution, and laughable acting around the latter parts.

Now, these distractions aside, I did enjoy some of the scares and gore scenes; I like the fact that the house acts like a separate entity and the heavy implication that something supernatural is afoot, and the masked killer girl was a nice touch though I really wish we get to see more of her. Shame that these elements were wasted on disposable characters as the idea of a haunted house with a mad slasher inside sounds like a solid concept; do it wrong and they'll end up something like this disappointing wreck.

So what if it's filmed with nothing but a damn phone? Hooked Up messed up!

Bodycount:
1 female pushed unto a statue, impaled
1 male found beheaded
1 female knifed to death
1 female ran through with a pitchfork
1 male beaten to death, tongue torn out
1 male jumped off the stairs, fell to his death
Total: 6
Posted by Kaijinu at 5:03 PM