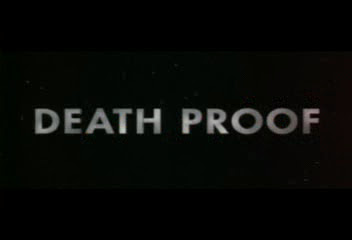 Quentin Tarantino is, by now, a household name that will make you cringe, bow down in respect, or simply go "huh"; the man directed amazing films like Pulp Fiction, Inglorious Basterds, and Django: Unchained, but was often criticized for his films' over-the-top violence, controversial subjects, and racial slurs.

Personally, I like the guy; he has presence and knows it, and his films are always something I can look forward to, no matter how diverse and strange some of them may come. This being said, I will discuss a film that many, even Quentin himself, regarded as the absolute worst of his filmography, a little number which was supposed to be a tribute to old timey slashers but eventually evolved into something much "different"; ladies and gentlemen, Quentin Tarantino's Thunder Bolt Death Proof!
The story of Death Proof focuses on two gal gangs and a single killer; the first half had us following a group of girls as they take a road trip down to a friend's cabin to a celebrate a birthday and simply have fun. Unknown to them, however, an aging stuntman simply called "Stuntman Mike" had been trailing them with an ill intent. One lap dance, one Nacho Grande Platter, and one murder victim later, he succeeds in killing the girls using his own "death proof" muscle car and manages to get away with it seeing there's very little evidence to regard this as murder and the girls have been drinking that night.

A few months after the incident, at another state, Mike is at it again. This time prowling a group consisting of a model, a young mother, a car enthusiast and a stunt girl, all coming the way down to check on a vintage muscle car for sale, as well as play a little game of Ship's Mast, a stunt involving a girl holding on at the hood of a speeding car. While the stunt was going great, Mike decided to join in and show them his way of having fun, pretty much attacking them with murder in his mind. That is until the girls decided to fight back and turns the tables against him.

Originally a slasher movie with cars, Death Proof is more of a love letter to the Carsploitation films of the 70s such as Vanishing Point (1971) and Death Race 2000 (1975), rather than that of the heyday classic bodycounters such as Friday the 13th (1980) or Halloween (1978). Still, it all worked around well as a horror movie on the first half and the first half only. The best way to describe what transpired there would be Quentin doing his own take of a slasher parody or satire; the victims were loud and obnoxious, the killer (played by Kurt Russell) is a more human and badass take on your late 80s wise-cracking slasher villain, and the murders were reduced to a single scene instead of having them fall upon the targets one by one. It is a gamble of an approach that will either tease away the target audience or entertain them with something altogether new; I personally didn't mind how different it is as the story have atmosphere, thus workable, and the kills were pretty good even if it happened too fast.

The second half is where we skipped away from the horror tropes and down into some sort of road thriller, which may appear as a vehicular twist (and a satirical stab) on the slasher sequences wherein the slasher girl gets stalked and eventually fights back to win against the killer. In here, a chase through the house or woods was replaced with a car chase that at first looked to be in Stuntman Mike's favor, until he got shot, chickens out, and got stalked in turn by his intended victims.

Between the first and the second half, I definitely enjoyed the second most as not only did it perfect the 70s exploitation feel, but it also had the more rewarding payoff from watching these girls do nothing but talk. The direction was handled pretty well and I had more laughs at the simplicity that it is no more than a high octane car chase that, again, fits the carsploitation bill the most.

All in all, Death Proof is not a bad Tarantino movie but it is understandably and agreeably lower than most of his works; most of the characters were not memorable which is, again, some sort of satire on how majority of slasher victims are simply meat for the knife and the only one that stood out would be the villain. Perhaps not coincidentally, Stuntman Mike is the only one that felt like your typical Tarantino character, witty dialogue and calm persona ever present, and for most of his appearances, he is pretty badass until the tables were turned against him.

The classic Tarantino-style script is still humorous and, once more, the last half of the film was fun enough to mend whatever flaws the first half had committed as a would-be horror flick. This being said, I could say Quentin works better with action exploitation than straight up horror.

In fact, his reason for changing Death Proof from a pure slasher to another one of his exploitation thrillers was that because he felt slashers are "inorganic", which kinda made some sense; I do agree that slashers are pretty tricky and coming up with a way to mold something new to it without messing up the basic premises is a challenge not everyone will succeed in. If you do it in any other way, you might ended up with something different, but I like to see this as a way of measuring one's talent in film-making and a chance to experiment with one's own style.

I personally believe Mr. Tarantino gave up too easily and I would really like to see him give this fair sub-genre another try, break his own mold and do something entirely different for once. Until then, I will continue to enjoy his Nazi Exploitations, Westerns, Neo-Noirs, and for this case, Carsploitations, and look forward to more of his films in the future.