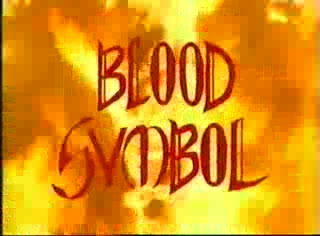 For perhaps a lot of us, Maurice Devereaux is a name to remember as the indie director of new age slasher cult classics $LA$HER$ (2001) and End of The Line (2008), energetic and imaginatively wild jabs on the bodycounting sub-genre with the prior darkly parodying reality game shows while the latter pits its characters (and what looks like the rest of the world) against a religious foundation on a killing spree in the name of salvation. With such big ideas for a what's basically popcorn horror, it kinda catches me off guard to see a rather simplistic murder mystery such as this from him.

Originally started filming back at 1984 and only to be shelved through the years until the early 90s (when most slasher movies were dying out temporarily), Blood Symbol follows Tracy Walker (Micheline Richard), a college girl who's currently having nightmares involving a disfigured figure in black, something which appears to starts weaving into reality when the same black garbed man begins to stalk her in campus. Tracy, fearing her safety, does what any early 90s horror heroine would do in an odd situation like this and decides to look up some of the strange images from her nightmares at the campus library, where she uncovers a history of Satanism and human sacrifices throughout the late nineteenth century. Not long then after, the stalking gets worse, and not only is the figure in black now also going after Tracy's friends, but they're starting to close in on our hapless protagonist.

Much like the case of a particular late 80s movie titled Blood Cult (1985), Blood Symbol is only part slasher movie with the rest being more reminiscent of a horror thriller, specifically of the religious cult type. There's a fair focus on amateur sleuthing and plot-building talking, leaving many of its horror sequences to black-and-white nightmares, decent looking stalking scenes and, whenever there's a need for it, a few good deaths that stay true to the Satanic human sacrifice plot. Not relatively bad, but some of the casts do show a level of amateurish acting (and what looks like some dubbed lines) which often hurts the effectiveness of the plot's own mystery, so Blood Symbol does have its slow tedious moments and variable performances. The killer doesn't look too bad neither, coming across like a heavily-scarred Italian giallo villain with their shades and black gloves, so I also find it kinda disappointing that the most this villain did was simply stalk and loom over our protagonist like a creep, racking up very little in the killcount. 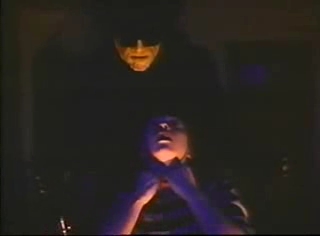 There's nothing much to say else about Blood Symbol apart that it does show itself as Deveraux's earliest work. There's style to it and the plot is decent for its simplicity, but these efforts can be easily overlooked for just how stale the rest of the production is and how unexciting it can be at times. Not the best there is for what it is trying to be, but if you see yourself as a completist of all things related to slashers, then this could be worth a single viewing and no more.