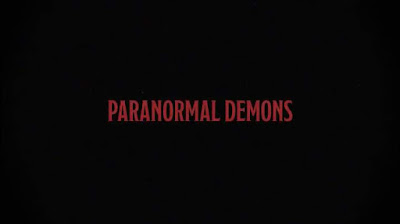 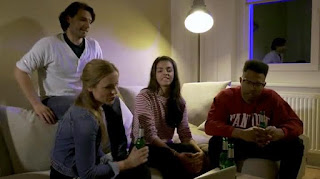 Paranormal Demon's quote-unquote tagline basically sums up what to expect from the movie; it's a found footage supernatural horror ala the Paranormal Activity franchise, with a climax introducing a masked killer wielding a halberd to do murder like them Friday The 13th movies. Nothing beats a straightforward marketing I guess, especially since there's really nothing else going on for the movie save for that plot.

In that sense, the story is mostly predictable in its flow, starting with a pair of college kids filming a documentary project about disproving the supernatural and the main focus for their claim of falsehood is a particular footage of a supposed demon attack they found lurking around the web. Seeing the location of the attack happens to be just a car ride away, the duo recruit some help (Or as I like to call them, bodycount fodder!) and plan on driving there so they can investigate and prove that the footage was faked. But not before stopping by your usual doomsayer (or two) who warns them not to go to where the "Devil" lives. Can you guess if they listened? 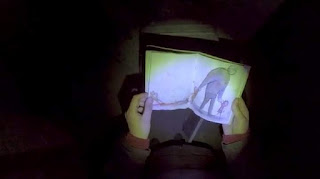 A sizable chunk of this first act is where the supernatural aspect of the film makes its rounds with varying levels of subtlety, yet still trapping itself with as many paranormal cliches you probably have come across other titles dealing with hauntings, like seances, poltergeist activity and, seeing this is a found footage film, glitchy camera distortions. Noticeably, however, this is all what Paranormal Demons has to offer in regards of "spooky ghostly visuals", just repetitive flickering effects edited to suggest the otherworldly and gimmicky camera work that is an insult to the word inept, so it isn't hard to feel very little investment to the supernatural threat or the scares it is suggesting.

This, in turn, makes the movie feel padded out, more over considering in between these uninteresting scares are cringe-worthy scripting and bland characters that failed to grasp some suggested opportunities the story could have used for conflict, making itself at least a worthwhile watch. But, instead, the intention appears to be cheesing up these characters to near laughable exaggeration before ending them in gruesome ways, thus the slasher element of the last act surprisingly felt natural in its stride. A confused, yet satisfying turn that is overall welcomed. 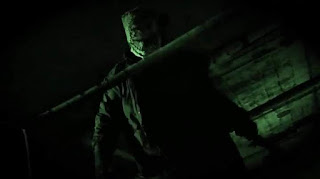 Now, this isn't to say that the slasher elements were handled the best here in Paranormal Demons. In fact, the killer's design is average and the killcount is hardly that high nor is it creative (plus there is the nagging matter that this is footage captured by a guy who wont stop filming, even if the people in front of him were getting their heads torn off!) but I would say that it is, at least, watchable for how gory it can be and how well some of the found footage elements were used to make the kills and stalk-and-hack sequences that more entertaining. The finale it all leads to, sadly, lacks any real punch to it, but for what it's worth, the whole thing could have ended worse.

Honestly, I can't entirely put down this film as a waste of time since I did enjoy the cheesier side of its direction and, again, the bodycount heavy last act catered well enough to my inner gorehound. So, I guess what I'm saying is that this isn't for everyone, but those in the mood for a guilty pleasure, Paranormal Demons (2018) is a good candidate for a rent and a watch.