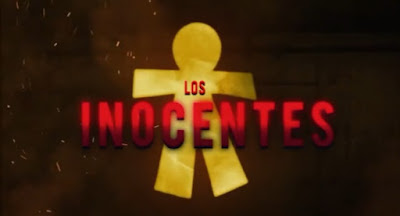 An hour and some minutes of down-to-basic slasher goodness from Spain? Oh my, I think Christmas just came early for me!

A collaborative effort of 12 directors (!), Los Inocentes tells the average slasher tale of nine teens getting lost in the road one El día de los Inocentes night (which is like April Fools day in Spain, celebrated it in late-Decembers), only to find refuge in an abandoned brothel and plan on spending the night there to party, drink and getting some old-fashioned premarital sex.

Unknown to them, however, the brothel was the site of a prank-gone-wrong 15 years ago, wherein a young man was scorched to death. Now, it appears someone -or something- doesn't want the teens there, promising death to all of them in the grisliest and far-fetched manner.

If you know your slasher movies then you'll know Los Inocentes' did a lot of things right as a bodycounter, ticking down the cliches and twisting it enough to create something out of the ordinary once in awhile. I guess you can say that the movie is a bit of the old and the new together, paying good tributes to classic slashers like The Burning, Friday the 13th and Slaughter High without the need of name-dropping or purposely copying scenes from these films for the sake of a "tribute". Instead, Inocentes felt like a familiar story, running through the slasher cliches from the silent killer's POV shots to the ole' sex-means-death trope, told in a way that is refreshing and energetic, choosing the right moments and directions to keep it shocking and dark when the moment calls for it.

This is quite evident with the wildly varying kills awaiting our hapless teens, including nailgun shootings and gasoline burnings, as well as really strange ones like bee attacks and death by laughing gas. These murders are done away with a good mix of CG and practical effects, a welcome effort made better with the movie's devilish side of dark humor and some good build-up for a couple of these scenes.

The killer committing these murders was also played around with as we never get a glimpse of them until the twist reveal, resulting to a good bulk of the murders either being set-up as traps or were just too fantastic to be committed by a mere mortal. This isn't to say that the film heavily implies the supernatural, but there were a few scenes that uses nightmare logic (or no logic at all) to snuff out the victims, thus making the reveal at the end quite a surprise in a way only a lovable B-flick can.

With only a running time of 65 minutes, Los Inocentes breezed through the plot with a fast pace, luscious camera work and a few likable (if not just tolerable) set of good-looking teens. Finding flaws among the mountainous amount of goodness this slasher have proves to be a rather difficult task, but I do have mixed feelings on how open-and-shut the ending was, with it being a too easy way to end. Of course, this coming from a movie where one boy got killed by a swarm of bees coming out of a car's air conditioner, the ending still fits with enough mean-spirited tone to be acceptable nonetheless.

More of the good and almost none of the bad, I'm proud to say that Los Inocentes is well-worth the video hunt for all of you slasher and horror fanatics out there! Gory fun to watch, easy on the brain, all the makings of a fun popcorn throwback slasher! Seek it and keep it!

Bodycount:
1 male scorched to death inside a boiler room
1 female bitten by a snake, hit by an incoming bus
1 male shot on the eye with a nailgun
1 female slips and cracked her skull against the floor, fingered on the brain
1 male stung to death by bees, beheaded
1 male doused in gasoline and set ablaze
1 male and 1 female suffocates on laughing gas
1 male shot to death
1 male shot with a hunting rifle
1 female shot
Total: 11
Posted by Kaijinu at 7:15 PM