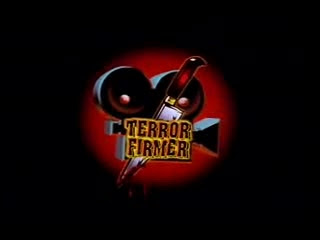 And once again, I dive into another love/hate relationship with Troma Entertainment as I "treat" myself with one of their better films, a self-referential stab at their own goofiness that's loosely based on a book titled  All I Need to Know about Filmmaking I Learned from the Toxic Avenger, known as Terror Firmer.

The plot revolves around Troma Studios finishing another Toxic Avenger entry but they can't seem to do so as their blind director Larry Benjamin (played by none other than Lloyd Kaufman himself) keeps changing the plot, the crew and actors just keep boning each other, and then there's a mad femme fatale killing a good portion of the people involved in the movie.

There's also tension within the production assistants as the serious Casey (Will Keenan) and eccentric Jerry (Trent Haaga) both have the hots for another PA, Jennifer (Alyce LaTourelle). The triangle goes from sweet, to romantic, to sexual, and then downright weird, but in the end she can only chose one and by the time that happens, something weirder and deadlier is bound to follow.

Then again, a lot of weird things have been going on throughout Terror Firmer that I am actually surprised that I sat through all of it and, by damnation, enjoyed a hefty portion of the madness! Yes, I still see this film as an overworked gross-out comedy that wholeheartedly addresses itself as the loving tribute to all things Troma, tackling jokes from the prude to the rude, offensive to disgusting, immature to mature (if you catch my drift) but with the violence so plentiful and the story actually making some slight of sense in terms of commentary and plot, all hope may not be lost for Terror.

The slasher bits here are an absolute treat on my book, featuring an intriguing killer babe with a bloodlust to match a rabid dog in heat. She quips like Freddy Krueger, has a moral compass (and voice) similar to Jennifer Tilly's character Tiffany in Seed of Chucky, and a maniacal sense of killing spree to rival Angela Baker from the two 80s Sleepaway Camp sequels in sense of creativity. Gore is obviously plentiful as, again and obviously, this is a Troma slasher, wherein the word subtle is buried underneath the pile of gunk, cum and shit, and almost every kill has to involve gallons of fake blood, realistic latex organs, and other kinds of bodily fluids.

I also found the fact that our killer is a supposed metaphor for mainstream movies hacking up indie flicks as an interesting notion; though I do love and respect indie flicks, with many of my fave slashers and horror flicks being hailed from indie directors (hey, Jennifer Kent!), but when it comes to most Troma movies, I can't help but understand where she's coming. Of course, in a way for Troma to make itself look sympathetic and the "real" victim here, the killer's real identity had to be in par with the overall gross comedy tone and pretty much have everything end up with a big middle finger to political correctness, catering to its (growing) fans. (As do many other Troma titles out there)

Production quality is (what else) of B-grade standard that often tips into Z-flick ineptness, so do not expect that much stellar acting and all that relatable character plotting, but do know you will be treated one or two offensive gags to the next. The humor here is specifically made for hard-core Troma fans and the copious amount of cameos of other well known Troma characters (The Toxic Avenger and Sgt. Kabukiman being some of them), so it is no surprise that this movie will divide viewers between the understandably utterly appalled and those who be laughing their shits off at every poop and fart joke here coz, well, Troma humor. I honestly find myself at the former but I did come to appreciate the self-referencing nature of the film, pretty much the cinematic equivalent of a stand-up comedian poking fun at their own flaws much to the approval and laughter of their audience.

Good "Good" Troma movies are hard to come by and, interestingly, some of the Troma movies I did enjoy are simply released by the company. On that note, I did notice that most of the movies I dislike from this studio are directed by Kaufman; I am, however, 1/16th proud to say that Terror Firmer finally changed that, at least for now. Kaufman, your films are an acquired taste and I want nothing to do with it, but I am happy that I somewhat enjoyed Terror Firmer. May The Toxic Avenger be with you!

Bodycount:
1 male bludgeoned to death with his own severed leg
1 female disemboweled, fetus torn out
1 male found dead under a mountain of cereal
1 male repeatedly stabbed in the head with a broken bog, brains scooped out
1 female trampled (flashback)
1 male crushed through an escalator, hacked apart with an axe
1 male shot on the head
1 male dies, cause unknown
1 male had his head fried by a falling stage-light
1 male had his legs crushed off between trucks, killed
1 male drowned in feces
1 female had her breasts shot off with a shotgun
1 male crushed underneath a car
1 male had his hand chopped off with an axe, groin mutilated
1 male decimated by a bomb
1 hermaphrodite set ablaze, ran through the groin with a boom mike
Total: 16
Posted by Kaijinu at 11:32 AM