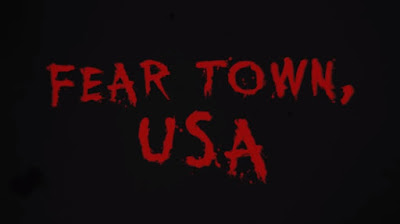 Welcome to Fear Town, USA, where gun-packing boyfriends shoot their girlfriends (and themselves) to death, retail discussion is a great substitute for campfire stories, and households store hundreds of bottles of bleach.

It’s also St. Blevin’s Day and the kids are delighted to celebrate that one holiday honoring a heroic pilgrim who tricked thousands of innocent Polish children into drowning. As parties are thrown and road trips are made, little do these idiots know that they’re in mortal danger as a masked psycho is on the loose killing people, the ghost of a deceased bully continues her trolling from beyond the grave, a van full of hooded people is seen around, and somebody who may or may not be Satan has stopped by in a party.

Told through the perspectives of separate groups, mainly four geeks on a quest to lose their virginities (or as they call it "pussycrush"), a girl who can see ghosts, and a group of campers wherein one has a urinary problem (just to name a few!), Fear Town, USA is a sort of anthology similar to that of Trick'R Treat (2007), wherein seemingly unrelated stories run their courses, only to be linked with one another through little snippets and chances.

A spoof of backwoods teen-kill with a fodder of hilarious sidelines, Fear Town might be cheap in production but it worked away its gags with much heart, style, timing, and cheese as far as their budget allows it, focusing more on the anything-can-happen mishaps, randomness and quirky dialogue that befall on its characters. As a marketed backwoods slasher, it is pretty decent on that department with the funnies coming more from its victims rather than the killer. For most, the welding mask-wearing psycho's played straight and is treated as the tying presence for all the segments, with the only hilarity we got out of him is that he has troubles shooting arrows and his motive during the reveal.

But personally, I believe the best of these subplots have to be the nerds getting stopped for a multitude of reasons that are hilariously crazier than the last, and the bits about a ghostly teen troll whose method of killing involves calling people "fat" over and over again. These segments have the most charm with the characters involved and simply for the absurdity of it all, matching quite well with the overall tone of the movie.

Due to the unpredictable nature of its narrative, Fear Town manages to keep some of its jokes fresh and modestly hilarious without going too over-the-top. (Most of the time. The hermaphrodite gag at the end is just too  much to be funny) A bit immature and corny at a side, yes, but I find these spoofs modest and chuckle-friendly all through out with its near-deadpan simplicity, reminiscent of the old Airplane! or Naked Gun movie.

I will also say that I am a little impressed at the amount of props and sets used for this flick despite the cheap budget; they’re nothing grand (obviously) but, again, it works well with the narrative style and humor so that’s a kudos for the film’s creative team. Of course, this would also mean a reasonable lack of blood and while I can overlook this in favor of the movie's comedy, I can tell this will not sit well for those who were eyeing for the gory kind of slasher spoof unless they're open for a little more variety done in a near zero-budget.

Some jokes and gags can get too random, but the net result is still an entertaining horror-spoof that could use more polishing. Nevertheless, Fear Town, USA still works as a junk food slasher spoof, the sort of movie you can rent overnight or over the weekend just for you to laugh your arses off, with or without the assistance of your favorite good brewsky. Worth a try!