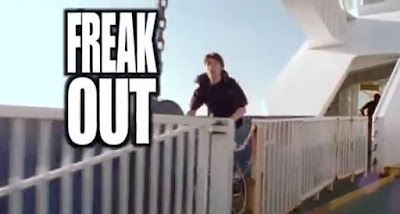 Interesting by far as slasher spoofs can go, Freak Out is one of United Kingdom's own hilarious spit on the sub-genre as we follow Merv Doody (James Heathcote), a nerdy slacker who lives with his grandma and spends his days after school watching rented horror videos. His life will suddenly change when he got his home invaded by an escaped mental patient named Looney (Yazz Fetto), whom he easily “defeated” and captured.

Although excited from the fact that this was the most out-of-the-ordinary thing to happen in his rather bland (albeit strange) life in Redwater Cove, it turns out Looney’s a disappointing pansy, though he is rather enthusiastic to be the homicidal vengeful killer he is destined (or he wished to be) precisely 13 years ago. Seeing some potential in the moron (and pretty much have nothing else to do), Merv agrees to help him and enlists the help of his bestfriend Onkey (Dan Palmer) to train Looney to be the best masked serial killer two idiots can make and sell out to! 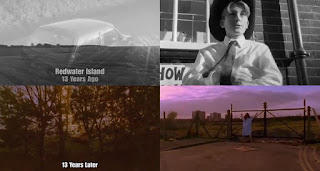 Of course, their plan begin to backfire when Looney starts to lose his mind (like, much more than they anticipated) and the realization that he will be killing folks suddenly puts Merv and Onkey in a position where they no longer want to be a part of Looney’s dream, which obviously isn’t going to sit well with the masked maniac.

With numerous random gags to put any viewer in a daze, Freak Out may have overdone a few of its jokes on a long run but it does get points for originality as the idea of an incompetent slasher getting help from a pair of idiots does call for a fun satire to the sub-genre and for a while, it was exactly that. 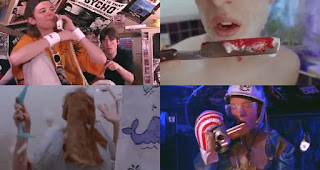 There are a few gags here and there that were worth a few chuckle, with the best scenes concerning Looney’s training to be a heartless slasher being the best considering how flimsy, gullible and vegan he is despite his eagerness to kill, easily shown to a few close calls he had in murdering a few folks. (And by that, I meant Onkey got into a lot of bloody accidents much to his friend’s worry and to the viewers' amusement.)

However, as there were good jokes, there were also gags that felt a little too pushy to the point it kind of made some of the characters less likable and a few scenes overworked that they are anything but funny. These jokes were one-trick sillies or overused situations that we may already have seen in so many other comedies out there, which shouldn’t be a problem if it was handled well, taken with a new approach, or, for this movie, trimmed down for subtlety’s sake.

Thankfully, Freak Out picked up quite okay after a while, bringing us to the last act of the film where a new fully-slasherfied Looney is now on full killer mode, chasing our hapless heroes and committing lots of massacres. The best of them had to be the final bloodbath that took place at a mall’s parking lot where more random folks get chased and slaughtered with a giant spatula and a salami-filled shirt gun might be the only way to stop our killer. It’s crazy, bloody, and insanely hilarious, just as everything we could ask for a slasher spoof final act.

Freak Out is an oddity from beginning to end that is more akin to Troma movies minus the extreme exploits and more on the childish unpredictability. Perhaps not for everybody’s funny bone as its randomness can only go so far in being funny but if you can learn to endure it as I did, it still packed some decent slasher action so I’m only recommending this for those who want to try it, or for those who are planning to see it with other good slasher spoofs like Pandemonium (1982), Fear Town, USA (2013), or even Dude Bro Party Massacre Part III (2015)!