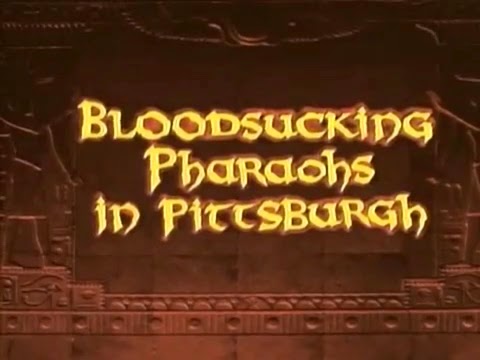 First of all, no. While the film was indeed shot in Pittsburgh, it does not include any bloodsucking pharaohs.

What we have instead are two bumbling detectives, Joe Blocker and Sweeney Birdwell (Joe Sharkey and Jake Dengal respectively), following a trail of murder and dismemberment that's getting more brutal (and absurd) than the last, perpetrated by a madman who pulls a kid's wagon full of high-powered tools, cleaning appliances and a large gas-powered generator.

Their only leads happen to be pieces of parchment with hieroglyphics on them and the fact that a spree similar to this happened in Las Vegas some time ago, little details that could mean anything... except that the perp might be hiding around Pittsburgh's Egyptian district (yes, apparently, that is a thing) and it is the same killer from the Vegas spree.

Unfortunately for these two detectives, they're idiots. Just idiots. But fortunately for them, Joe's former partner's daughter (and meter maid)  Deedee (Susann Fletcher) decided to come out of the blue to help them with the case and she's doing a better job at it! But just when things are finally looking up for the trio, the killer kidnaps Deedee, transpiring to a melting pot of underground cults, ninjas, a woman's smoking aversion therapy, and more blood. Of course.

Overall weird and making little sense despite the (sort of) existence of a plot, Bloodsucking Pharaohs is really a love letter for 60s/70s gore flick and cheesy 80s slashers, doused in spoof juice that oozed out of films like Airplane! or The Naked Gun trilogy, set out to dry in an air of obscurity and cult following.

As a parody, it's pretty hit-and-miss with the gags, often feeling like it was trying a tad too hard to be funny as it attempts to cover a lot of comedy styles. In turn, the humor felt inconsistent and resulting to a rather confused final product that's either a straight-out parody or just a cheesed up slasher flick. A good example of this randomness includes a detective's chain-smoking wife going through a rehabilitation program that involves a gaggle of "deterrent", from a film viewing of a plane (full of chain-smokers) crashing, to being electrocuted by a group carrying cattle prods. These are scenes inserted every once in a while throughout the movie, serving very little purpose but to pad up the running time and be, well, funny. Unfortunately, it's only funny in a selective case and it does very little for the main story until the chaotic climax. wherein a supposedly hilarious scene somewhat helps the detectives finish off some bad guys.

Thankfully when it does manage to deliver, Bloodsucking Pharaohs in Pittsburgh delivers well; the three leads are likable on a level and while they can be annoying as characters, they're not insulting bad. (Also, we got Don Brockett from Mister Roger's Neighborhood as police chief Buzz Saw. How weird is that?) The mystery is a decent one too despite the obvious solutions, and it manages to deliver a great dose of gore courtesy of a makeup department under the supervision of effects maestro, Tom Savini. (In fact, the gore might as well be the best thing about this movie!)

It eventually breezes to a rather fun and energetic climax that ends with a satisfying note as a horror-comedy. Safe to say, Bloodsucking Pharaohs is flawed, but not a total lost especially if you have a funny bone and/or a gore craving to spare. It tries to work with what it have and it attempted to be hilarious without being all on our faces with it, so I guess that deserved the film at least a single viewing. Try it out!