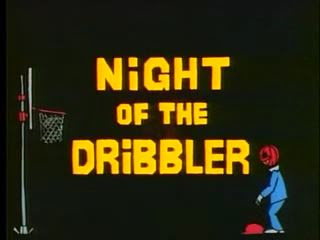 No. A hundred fucking times "No".

Night of The Dribbler was a supposed lost slasher until a few horror fans became aware of its existence, herded enough attention about it and somehow convinced a high power (or at least an unfortunate distributor known as Code Red) to have it released. Little do they know they'll be wishing they haven't done that.

In this movie, a really terrible basketball team known as The Plumbers is on their 6th year losing streak and appears to be decreasing a teammate one suspicious accident at a time. A lot of them got hurt. Very few gets killed. All perpetrated by a hoodlum in a rubbery basketball mask. But who could it be? Is it our hero, Stan Bates (Gregory Calpakis)? A benchwarmer stuck on ball boy duties who dreams of becoming a basketball star? His overbearing dad who isn't too happy with his son's current position? The goth girl Becky (Flavia Carrozzi) who obviously had taken a liking to Stan? Or maybe it's that weird science teacher who always finds himself in wrong place at the wrong time?

Personally? Who cares. Night of The Dribbler is a sad, futile, unfunny attempt to be another Airplane! version of a slasher movie, so much so that its 88 minute running time left like 88 hours! The obvious reason for this is that the writing had it fall flat on a joke in every minute, all of them wall-bangingly horrendous for how ungodly un-hilarious, inept and overworked they are. Making all of this worse is the fact that none of the casts have any charm or wit to their portrayals, the entire movie cannot hide its overall low budget, and the "slasher" subplot (which the film's extensively marketed as) was hardly used with only two victims ending up dead and the rest are harmed so badly that they can't play basketball. Yeah, harm counts. We pay good money to have a slasher out and all we got is a spoof with fucking harm counts. Zippy-Dee-Doodah...

Before this movie, the one of the last slasher spoofs treated to us was Pandemonium back at 1982 and that personally remains one of the best slasher spoofs ever made; it has workable characters, a pace in its jokes, and the overall randomness felt balanced enough to really make the funny tone work. A few things Night of The Dribbler obviously lost even before the actual movie began. For its worth, I dig the killer's mask, but if this is the only thing I can root for from an entire movie, then what's point?

Nothing! Just like this movie will be in my memory after I finish fifteen Jello-Shots! Avoid like a plague!

Bodycount
1 male head seen
1 male electrocuted in a pool with a live TV
Total: 2
Posted by Kaijinu at 5:05 PM