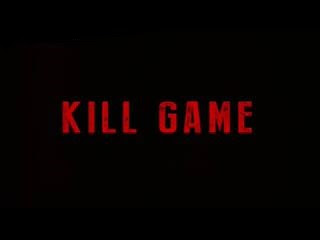 Standard is what standard does and Kill Game played this no better.

Following the Prom Night (1980), I know What You Did Last Summer (1997) or even Sorority Row (2009) backdrop, Kill Game has six former highschool buddies gathering together to pay respect to one of their friends who was killed in a supposed bad drug deal.

This, unfortunately, wasn’t really the case when it turns out, a maniac in a Marilyn Monroe mask is actually hunting them down, apparently avenging one of their own friends who they accidentally killed in a prank-gone-wrong. As the death toll rises, the gang is forced to try and uncover who is behind the murders. But with so many former-prank victims possibly out to get them, which is further complicated by the arrival of their dead friend's estranged twin brother who just came to town looking for answers, trust is a risk too dangerous for them to take.

Perhaps it’s the length of the film that plays against itself as the cheesy melodrama and mystery can be a hassle, especially if it involved clumsily portrayed characters and a conflict that's been done multiple times before. Some red herrings were attempted to make the film as twisty as the crime thriller it is trying to be (Y’know. To keep us invested in the mystery) but they were dead obvious and did very little to make the story intriguing, leaving much of the narrative barely surprising and its cast overly dramatized with little-to-no effect.

Much of this is evident around the middle portion of the film where around five to four characters are left and the story took the opportunity to slow down and focus on them trying to deduct their predicament. I admire this effort but, again, it comes with the delivery of the casts and while not exactly terrible, you can tell they could use some work on the acting gig. Until then, it’s nothing but people panicking, being remorseful, brutally dying, and talking in a threatening manner to make them look like a suspect but is actually not. (That’s how blatantly obvious these red herrings are)

Thankfully, the film manages to do the slasher parts just right as not only did it feature a creepy/cool masked killer but the murders they commit are graphically satisfying and worth sitting through some of the trouble. As mentioned, they come across somewhere between torture porn and standard slasher killings, so expect the killer to have a tendency of putting their victims in elaborate set-pieces such as blood transfusions with a dead deer and one Friday the 13th redux-inspired bonfire roasting. These elaborate sets, though, are ex-pranksters exclusives so everybody else who got in the way are treated to machete beheadings and hackings, thus the traditional stalk-and-kill still being present to cater those preferring their murders back-to-basic.

I can’t say that Kill Game failed as a movie since it did do what it is supposed to do; a trying whodunit that can’t hide its slasher exploits with all the blood and cheeky murder mystery antics it so generously (and I mean generously) provide. If only they downplayed some of these overly dramatic crud, I could have liked this better, but I say for those with enough time on their hands, give this one a try as a fair rent.