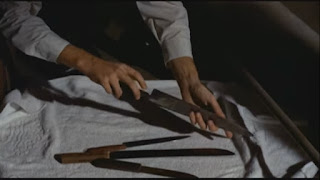 Welcome to the Grandview hotel! One of California's finer beachside establishments with good food, good music, good lounging and... a killer wearing an over-sized monster mask ?!

It appears someone is lingering all over the hotel, stalking and murdering women before sneaking their bodies away to God-knows-where, leading to most of the hotel's staffs believing that these women just sneaked away without ever paying their bills. However, the hotel's guard-slash-former detective Rick Stewart doesn't buy this and believes something else might be at play here.

He decided to look further into this, much to the disapproval of his colleagues who fear his snooping might give the hotel a bad reputation, but when Stewart's ex-wife-slash- lounge singer Lisa James decided to show up and perform at the hotel, Rick is determined to find the maniac before they strike again...or at least before they see the former-missus dons a blonde wig!

As much as I want to describe my experience with Wicked, Wicked as simple as "weird", this proto-slasher actually won me over with its tongue-in-cheek undertone and, as gimmicky as it is, the utilized split-screen format, marketed here as "Duo-Vision".

It did took me a bit to get used to the two-screen storytelling, but once I adjusted to the cheesy gimmick, I found myself captivated and slightly-impressed on how they put it to use, giving us dual perspectives of some single scenes as well as utilizing it for flashbacks, reveals, and even a few details that fleshed out some of our likely suspects, without the need of halting the main story. It's silly, yes, but it helps in the very little way it can in making something out of the tepid story, which was already being boosted up as an entertainment piece by its high dose of camp and some worthwhile musical undertones. If anything, the movie appears to be poking fun at itself as a rather carefree and bodycount-friendly take on a psycho-thriller, a film entertainingly dumb enough to go well with hot buttered popcorn and switched-off brains.

This being said, Wicked, Wicked isn't going to be a movie for anybody expecting a well-written and well-executed horror flick as, for one, it wasted a potential murder mystery angle by revealing the killer way too early, leaving a good dose of the remaining run focusing on our leads figuring what we already know. The only real mystery left at that point was "why" the killer's committing the murders, but if one would focus on the split screen flashbacks, that department's pretty standard on my book as well. 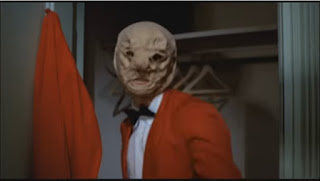 Due to this, mighty good portions of the movie goes through a lot of fillers answering questions one could have already figured out by then, unnecessarily and unevenly slowing the film down. Fortunately, after so many cop-and-killer shenanigans that includes dirty pipes and hidden rooms, Wicked, Wicked managed to get back on its feet once the killer's little secrets were discovered by our hapless heroes, revealing what he does to the bodies that rings familiarity with later slasher flicks such as The Horrible House on the Hill (1974), The Texas Chainsaw Massacre (1974) and Pieces (1982), and soon wrapping up rather cheekily with a hilarious villain demise and a meta-joke that sounds awfully like what the gravedigger spat out at Friday the 13th Part 6: Jason Lives.

All-in-all, I think Wicked, Wicked is a flawed treat, a new little guilty pleasure I can heartily enjoy only if there's nothing else to see. It ain't that great to be wholefully recommended but it wouldn't hurt to give it a peek if it's on TV.