Watch This With Hambone: Terror at Blood Fart Lake (2009) 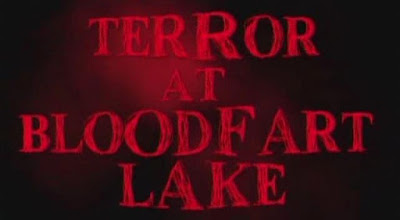 A little guilty pleasure of mine. One that gives me the chuckles every time I feel like seeing it.

We first see Hambone; Hambone is a rich dude with a weird accent and refers himself in third person. Hambone just invited his friends to his lakeside cabin. Hambone is happy that his life (and his T-shirt business) is working out well for him. Hambone decided to take a dip at the lake only for Hambone to be attacked by a killer. 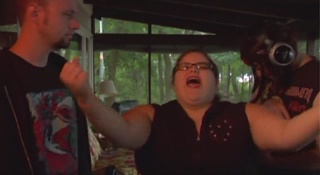 After that incident with Hambone, we now follow a group of five idiots who are supposed to be stereotype slasher victims depicted by actors who are clearly into tats and piercings; these guys are Ben the main nice guy, Zeebs the cocky jock-type who also has a weird accent, Sally the overweight goth, Snake the stoner, and Gwendelyn the misplaced 50s flapper who has a thing for movies.

Along the way, they come upon Leo, a hillbilly with a (not) dashing mustache warning them of a death curse at the lake they are visiting, all the while helping them re-fuel their van by peeing into it. Not wanting to do anything more with Leo, the kids continue their way and meet their flamboyant afro-wearing host Caspian, who instantly taken a liking to them. It’s not too long, however, before the killer strikes again, apparently a gayish skull-headed scarecrow slasher named Jimmy, who in turn is unaware that a mysterious femme-fatale vigilante is hot on his trail. With all of this, one question remains; will there be anybody left alive in the end?! Done in an obviously meager budget, Terror at Bloodfart Lake didn’t bother hiding any of its homegrown quality as we can tell these are just people in cheap costumes having a good time in making fun at the sub-genre itself, trying to make the jokes work with its weird plot, weird visuals, and a plethora of weird writing for equally weird characters.

This is a personally tough film to review since I can tell the humor here is not going to cater everybody’s funny bones; it has this subtle yet over-the-top randomness that follows the typical backwoods slasher format, only with some odd set-pieces and each character sporting their respective clichés dumber in cartoonish exaggeration, this including our killer who speaks with a shrill flimsy voice, kills with outrageous murder weapons and merrily skips away after snuffing one off. Some may find this hilarious, some may look at it as desperation, so it’s only real disadvantage (like any zero-budget slasher spoof out there) is how well it caters to its audience’s taste for comedy and tolerance for zero-budget. 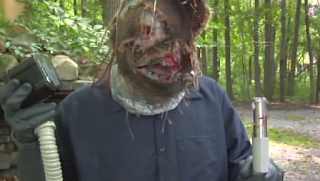 Thankfully for this film, I am one of those who found its jokes far from the obnoxious in-your-face overworking of what is considered today as "spoofs". (Disaster Movie. I'm looking at you, you sonova-) With Terror pretty much boasting some workable quips and visual humor that sort of remind me of the refined craziness of Airplane! or even the Naked Gun trilogy only with a near-absent budget, you can tell these guys had a blast doing this film even if some of the jokes had been done before. I guess this is what puts me in a tad bias position when it comes to this title: I just love a movie with a heart!

The amateur acting and obvious lack of props surprisingly go quite well with the purposely bad script, and while some of the gags did got a bit gross, these can be easily overlooked by the dialogue and body language driven absurdity that this movie possesses. It's not perfect as a slasher or as a full-on comedy, but any film that can make corn murders as bloody and cheesy funny, or terrible pick-up lines as groan-tastically hilarious as Terror did deserves at least a viewing.

If you want to try your hands on some homemade slasher spoof, Terror at Bloodfart Lake is an absolute addition to your viewing tick list. A little gooey, a little bad, but a whole lot of fun!

Bodycount:
1 Hambone killed
1 male stabbed on the eye with a corn cob
1 male gets a corn cob shoved through his arse, exits out of groin
1 female force-fed with her own fat, choked
1 female ran through with a corn cob, neck broken
1 male eaten alive by...hell leeches grown from someone's arse...wait, what?
Total: 6
Posted by Kaijinu at 1:47 PM