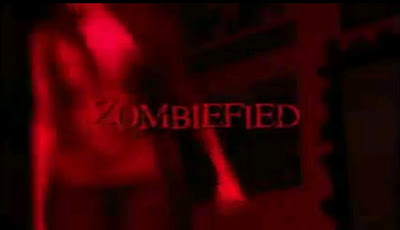 For me, there are two ways one can plot a "slasher hybrid"; you can either start off or end as a slasher before/after making way to whatever the other genre is going to be (like what Severance (2003) or Hot Fuzz (2007) did as a slasher/action hybrid), or you can try molding the two building elements into a single unique abomination that still stays true to the subgenres. (Like what Without Warning (1981) or Chopping Mall (1986) did as a scifi/slasher hybrid)

A villain in a Richard Nixon mask suddenly appears to wreck havoc at a small town by murdering a few victims and zombifying some using strange music that drives people insane and cannibalistic. When he decided to bring forth his terror on a larger scale, he visits a club and infects the entire audience before unleashing them to do their flesh-munching frenzy. Surviving and escaping this strange predicament are a couple of band members who later find out that their (as well as the rest of the world's) only hope of stopping all of this falls to two friends who encountered and stopped this plague before. But with the Nixon killer still out there murdering anyone who got in the way and turning people left and right into zombies, it's only a matter of time before he and his army are unstoppable!

With all honesty, I enjoyed the ideas played around here as they gave something unique for the two subgenres mashed, but it felt like one was overthrowing the other.

While we do have a slasher-esque main villain by means of body language and apparent indestructibility very reminiscent of Halloween's Michael Myers (along with some Italian giallo-inspired calling cards ala posed mannequins), the fact that our Nixon killer seems to be more focused on zombifying people than downright murdering them chipped away the slasher feel, especially when it dawned on me that he only directly murdered a handful in a not so flashy manner. (Save the spindle kill. That was cool) If anything, he is more of a comic book bad guy scheming plans of worldwide destruction and only murdering victims when he deems it necessary or whenever he felt like just doing it. I personally have no trouble with this but the part of me aching to see him do some real slasher mayhem under the promise of a zombie/slasher hybrid was unfortunately underwhelmed, if not disappointed.

If there will be any other drawbacks here, it's going to be the fact that the middle act felt like it was stretched out just for the sake of repetitive zombie attacks and bodycount. This might not be that big of a gripe, though, as I am sure some people out there will find the chaotic, mostly random zombie attacks as fun.

And speaking of zombies, they are the most on screen as majority of the play have these hungry flesh-munchers attacking random bystanders and/or groups, giving us some of the better looking latex gore and fake blood the film's low budget production can afford. I have a special relationship with zombie movies as, before I began rekindling my obsession with slashers, I used to watch and draw these walking and/or running dead with a passion as a preteen youth and thankfully, Zombiefied delivers better with its zombie elements.

What I find most enjoyable about these zombies, despite the wonky execution of their concept, is the fact that they're a unique breed, being violent brainwashed cannibals instead of the rotting shambling undead. This actually helps the film work around its small budget as it didn't call for complicated zombie make-up (since they are still alive) and it brought out some unique mythos rarely tackled in a zombie movie, such curing the infected (By playing the infectious song backwards. Clever?) and that the infection doesn't spread by bite or scratches. (The latter being pretty much the only reason the Nixon Killer sticks around.)

The last act has both zombies and the masked maniac taking on our cautious yet strong-willed (and not so annoying) survivors, in a way that really felt like a true genre hybrid, with two of the leads discovering Nixon's cabin lair and battling him while he both sends his zombie horde against them and personally picks them off whenever he gets the chance. This was a rather good payoff but I really wished they found a way to incorporate this with the entire act instead. Nevertheless, the resulting product was still a fun watch, even if it didn't hit all my notes for a proper mash-up right.

To date, this is director Todd Jason Cook's best effort for a z-grade horror flick. If that name sounds familiar to you, then congratulations! You are a hardcore horror fan and you must have seen the obscure cheap cheesies Evil Night (1992) and the Lisa's Nightmare series (which he all directed), as well as Night of the Clown (1998). (which he starred at as five supposedly different characters!) Though this hardly made me a fan of his works, I was entertained at a level with Zombified so I give him and this movie a pass as a shlocky yet unique brand of both a zombie movie and a sort-of slasher.

For more zombie/slasher hybrids, I heartily recommend Dead Snow (2009), The Dead Pit (1989) and Trailer Park of Terror (2008) to go with this movie! Or, if you are a literary person, try looking for that Friday the 13th Black Fire novel The Jason Strain. Now that's a zombie/slasher hybrid!