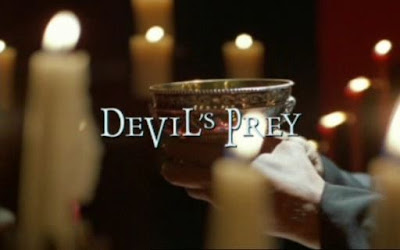 One thing I love about this hobby of collecting and reviewing slasher movies is that I get to re-experience some of the films from my more innocent years, hoping that it will stand against the test of time. My time.

Though some did manage to remain as entertaining as the first time I watched them (Tobe Hooper's Crocodile, Eli Roth's Cabin Fever, the first Wrong Turn entry, just to name a few), there are also some that underwhelmingly disappointed me to the point I question myself 'what exactly did I saw in this?' (The Fear: Resurrection, I've Been Waitin For You, Halloween H20...yeah, I'm serious about the latter)

Devil's Prey falls in between the two as it's not that great of a movie (even when I first saw it), but you can tell the flick tried. Really, really tried.

The story is easy enough to follow as five teenagers (out of boredom) decided to attend a random rave located at the very backwoods part of town, only to be kicked out when they get involved in a fight. While driving home, they accidentally hit a fleeing gal (who luckily survives) and decided to help her, unknowingly marking themselves as targets for a blood-drinking cult of Satanists.

For an 88 minute movie, the plot is really nothing more than one very long chase scene with casualties coming from both sides of the party, mostly from the cult who can't seem to capture five teenagers all at once. No, really, with their number, catching five teenagers should be a cakewalk but they kept going at these teens one by one, pretty much getting their arses handed to them, if not getting killed themselves. Worse even is the fact that this film attempted to put a twist halfway into the act, revealing a traitor among our protagonists that really came out of nowhere, making me further wonder what took that character this long to reveal their true agenda, as well as me questioning how organized this cult is because, judging from what I'm seeing, they're awfully sloppy as bad guys.

Bad writing and plot holes aside, everything else in Devil's Prey is your typical teen slasher with cardboard characters, T&As, loads of backwoods chases, and a decently monstrous bodycount, though the later act dwells into being a Satanist horror flick with rituals, black masses and human sacrifices, just to live up to the title. Nothing totally awful thanks to some decent camera work, energetic stalk and/or kill scenes, and popcorn friendly corniness that's just fitting as a late night runner.

Devil's Prey is honestly a bad movie made for anyone who can stomach horror idiocy from zero characterization and cheese, to needless sex scenes and a groan-worthy sequel-teasing twist ending, so it is no surprise that this title is rarely talked about. Personally, I can dismiss as well as the next sensible horror fan would, but the little shred of nostalgia helped lighten the bad cheese punch and for the little entertainment it is worth for, I did enjoyed it as a time-waster. See it if you like but don't expect too much.

Bodycount:
1 female hacked with a machete
1 male bludgeoned with a dead branch
1 male knifed on the gut
1 male bludgeoned with a fire poker
1 male hacked with a machete
1 male shot on the head
1 male crushed underneath a car
1 female cut to death with a dagger
1 female stabbed on the gut with a dagger, immolated in explosion
3 males immolated in explosion
Total: 13
Posted by Kaijinu at 6:54 PM