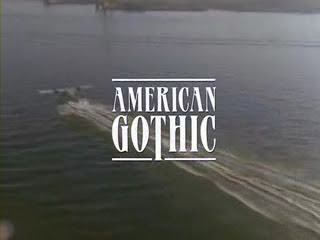 Recovering from a traumatic breakdown involving her baby's accidental drowning, Cynthia decided to try cope with the loss and move on by spending some time vacationing with her friends. However, things don't go as plan when their private plane suddenly breaks and forces them to land at a lone deserted island nearby. There, they discover an odd family made up of an aging couple and their three "children" (who are really middle-aged adults acting and thinking like 12-year olds) living in an log cabin, completely isolated from the rest of the world.

Overly religious and outdated in thinking, the clan provides shelter to the stranded group so long as they don't have sex, curse in their household, or do anything that'll offend the family's Bible-thumping ways. However, it seems "thou shalt not kill" is not a part of these religious nutter's sacred commandments as, one by one, the three "children" begins to kill Cynthia's friends under the pretense of a game, until our broken heroine's all that's left and we were left with 20 minutes of running time before the end credits.

Though the first act was definitely a slasher with an oddity of a killing spree and some classic backwoods cliches attempted, American Gothic decided to take a strange turn by having our supposed final girl snap into dementia and join the happy zealot clan, at least until her already fragile mind pushes her to a killing spree. I have to admit this was a rather nice direction, one that was rarely (if not never) attempted by any other slashers of its time. However, I believe it could have been done better than just packing everything in a twenty minute final jog; the first hour attempted to shock us with implied incest, religious banter, necrophilia and dead babies, but this third act was somewhat robotic and everything just falls into place too nicely to be anything shocking. No struggles, no slip-ups, almost everybody just dies and that was it.

Still, as flawed as this turn was, I guess I cannot fully dismiss American Gothic since it did brought something rather new to what would have been another backwoods slasher. It's a small gesture, yes, but a welcome try that went well along the movie's low grade campiness and absurdity, courtesy of acting from the okay-ish (with a little dash of laughable) portrayal of its villains and, again, the cult-worthy weird plot.

American Gothic is a nutty film and I believe we were supposed to appreciate it as that; it's not the goriest and/or bloodiest late 80s slasher around but it gets the job right in entertaining us with its obscure story and characters. If loopy homicidal families are your thing then make sure you get a dose of this cult fave at least once.

Bodycount:
1 baby drowns in a tub (implied)
1 male swung off a cliff, falls to his death
1 baby's corpse seen
1 male gets a toy's spear to the eye, stabbed with knitting needles
1 female found hanged with a jump rope
1 male found with a hatchet buried into his head
1 female had her neck snapped
6 skeletons seen
1 female bludgeoned with a washtub
1 male stabbed on the head with a toy's spear
1 female stabbed with knitting needles
1 male hacked on the neck with a sickle
1 male shot with a shotgun
Total: 18
Posted by Kaijinu at 2:54 PM