Not As Sacrilegious As You Think: Devil In The Flesh (1998) 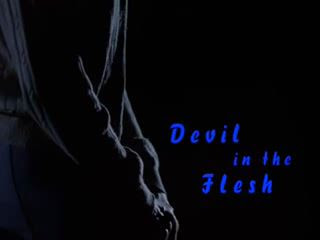 Wes Craven's Scream's Death-By-Elevated-Garage-Doggie-Door-Crushing victim Rose McGowan stars in this slasher-esque stalker teen flick wherein she plays not the victim, but the aforementioned Devil In the Flesh.

Although not as religiously sounding as the title makes itself to be, McGowan is Debbie Strand, a newly orphaned teenager who lost her mother in a freak house fire accident (accident, right...) and finds herself living with an overly religious (and possible racist) grandmother who demeans every little thing she do.

Apart from this, life as a cliched 90s teenager seems typical for Debbie; she's the new girl in school, makes a friend, catches the eyes of a couple of highschool assholes (a jock and an "it" girl, of course) and develops a schoolgirl crush on her English teacher, Mr. Rinaldi. (All in her first day of class) Unknown to them though, Debbie herself is far from typical when it turns out, she can be very possessive and obsessive with her crushes. When too many buttons are pushed and too many hindrances are getting in the way, our Devil in the flesh snaps and starts killing her way to Mr. Rinaldi's heart, whether he wants her to or not.

From tame music video-esque sex scenes to nearly bloodless killings, you would expect a direct to video piece like this would be a lot more daring with the stuff they can get away with, like more conflict between characters for the sake of development, graphic massacres, or at least a few additional nudity to keep us on our toes, but all we got is an unevenly paced slasher fare with a fair bodycount, disguising itself as a mature run through all the basics of a paint-by-number stalker story.

At least we got some cheese on the side and McGowan stealing every scenes she is in (even if she never flashed herself topless), Devil In The Flesh is by in anyway no masterpiece but it is a worthwhile watch if you got nothing better to do, or if you are just curious what miss Rose did after Scream and before she was Paige Matthews of the Charmed TV series and Cherry Darling of Planet Terror (2007).

Bodycount:
1 male and 1 female burned alive in a flaming house
1 dog locked inside a trunk and poisoned with bug spray
1 elderly female bludgeoned to death with a cane
1 male impaled with a spear
1 female bludgeoned with a kettle
1 female shot on the head with a shotgun
1 male had his throat cut with a knife
Total: 8
Posted by Kaijinu at 7:30 PM