The Ghosts of Dead Hookers Past: Blood Sisters (1987) 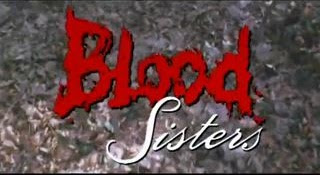 A haunted whorehouse slasher flick. Seeing this was directed by Roberta Findlay, the wife of 70s exploitation cinema personality Michael Findlay, why am I not surprised?

As a hazing stunt courtesy of their all-girls fraternity, seven teenagers are to stay overnight inside an abandoned and supposedly haunted brothel wherein, 13 years ago, a double murder took the life of one man and one hooker. Sneakily joining them are the boyfriends of some of these girls, hoping to spice up the night with their presence as well as make the stay exciting by setting up some pranks.

But, as always in these movies, the guys and gals soon discover that they are not alone when ghosts of dead prostitutes began appearing (Which doesn’t really add up since we only saw one dead hooker in the beginning. Is there something this movie’s not telling us? Where the heck did all of these ladies come from?!) and someone dressed as a drag starts thinning down the live ones.

As a fairly forgettable bodycounter, Blood Sisters ticked all of the boxes on what makes a slasher movie terrible, with its only redeeming factor is it's decent cheesiness which, for some viewers, could be a good enough reason to try it. For all honesty, I never disliked Blood Sisters since I find its camp tolerable in standards, but I can also understand why many would be turned off by this.

The characters, for one, were scripted terribly and sitting through their shenanigans can be considered a chore for those who don’t have the openness or tolerance for bad acting. The director’s (or rather, the director's spouse's) exploitation background is also evident throughout, something that, again, might mean something for a selected few but comparing this with the other cheesy late 80s slashers being released for its time, the style and tone felt aged and hardly new. Special effects are atrocious and the killer, supposed to be dressed in hooker apparel, looked like they're wearing gramma's nightgown ala "spoopy ghost". Yeah, no, killer, Norman Bates got that covered...

It's trashy but Blood Sisters will always have an audience. I halfheartedly like it but I think I'll give myself another round of Sorority Row (2009) to satisfy my  craving for dead sorority sisters, or maybe even that weird Dude Bro Party Massacre (2015). (More of the latter if I want cheese to go with them dead sorority types!)