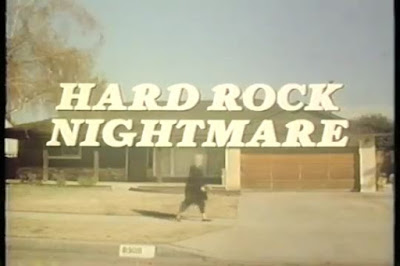 Surely, there are bound to be other werewolf slashers out there save for the film adaptation of Stephen King's Silver Bullet, right? Other movies to feature a big hairy lupine monster stalking and killing victims in the most slasher influenced way? Why, of course! And here is one of them: a monster-in-the-backwoods rarity known as Hard Rock Nightmare!

Some time ago, young Jimmy was terrorized by his grampa who claims to be a vampire and a werewolf. (A "werewumpire", if I may) Unfortunately for the old geezer, Jim took all of this seriously and hammers a stake down at grampa's heart, much to the tyke and his gramma's horror.

This mistake traumatizes Jim for life, but he manages himself by starting a band called "The Bad Boys" with his big-haired friends and big-haired girlfriend. All was good until one jamming session had them in hot water with the local cops for playing their music too loudly. Not wanting to get into more trouble, one of them suggests that they visit Jim's late grampa's home for a weekend of fun and rock'n roll, a plan that got our hero a little uneasy but agrees to anyway as he sees this as an opportunity to fight off his trauma.

One dream about his friends being zombies later, Jim and his buds makes it to the house, rehearsing and sleeping with the girls as they planned, only to have one of them lose his noggin from an apparent werewolf attack. Perhaps the old coot's crazy talk of being Grampa Munster wasn't crazy afterall!

From that point on, Hard Rock Nightmare tackles down all known slasher movie trite such as people leaving the group and splitting up to find help (inevitably falling prey to the werewolf's claws), POV shots of the monster heavy-breathing, and a few stereotyped characters getting their just desserts, just to name a few overused ones.

But for a film to end up this obscure, I would say the reason for this is that Hard Rock Nightmare was barely bloody and can be repetitive with its killings as a monster/slasher hybrid, something that may not sit well with the fact that the horror action also took a while to start. Thankfully, I still found some strengths that evened out the flaws, like how the movie was done away with a fair amount of cheese and a slightly comedic tone that it can be distracting enough to be hilarious, passing the running time loads of laughably bad performances that went sorta well with the silly situation, fever dreams, and the over-the-top twist reveal that felt more fitting with a Saturday morning cartoon, but doltish enough to be acceptable.

There's also the rock and roll soundtrack that was quite a surprise for me, seeing I'm the kind who thinks rock music in a horror movie is more cliched than the sex=death slasher rule. It also helps that the the songs featured here were pretty good, particularly the number the band played during the opening.

As a horror flick, Hard Rock Nightmare fails to be terrifying despite the attempted monster and slasher movie scares but it makes up quite a lot with its tongue-in-cheek scripting and campiness. It's as straightforward as it can with its approach and lovers of horror of the Cheddar kind can definitely find something to appreciate from this gem as one of the few epitomes of an entertaining popcorn flick! See it if you can coz it is worth the hunt!